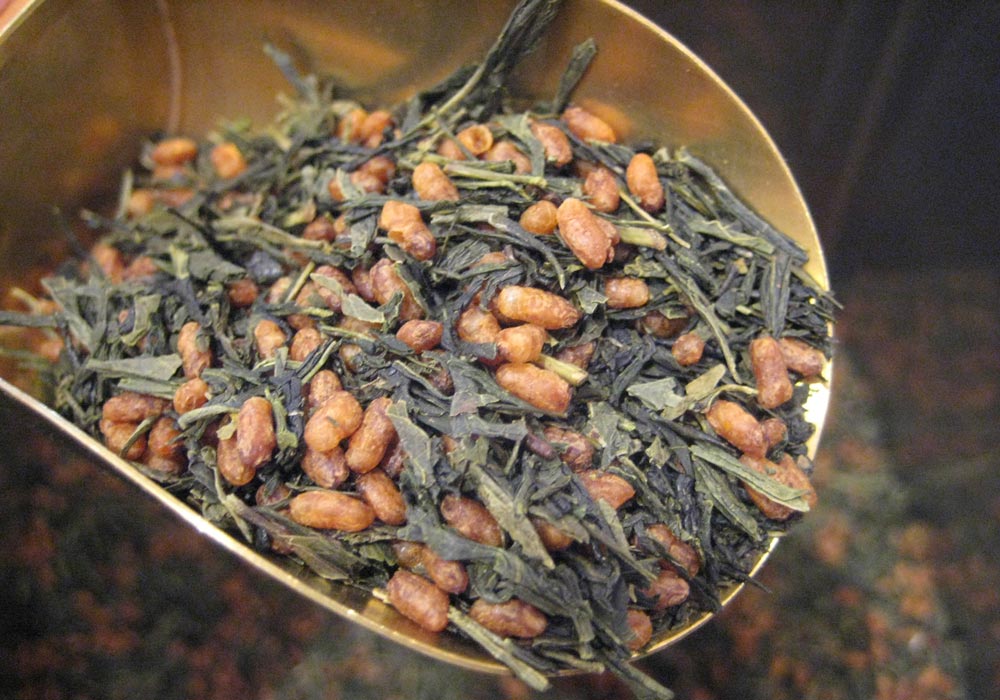 Genmaicha (which is the Japanese word for ‘brown rice tea’) is a wondrous, and little-known Japanese culinary treat that offers a natural combination of starch, sugar and a nutty flavor in an easy-to-prepare beverage. Not only is genmaicha a warm, nutritious breakfast or anytime drink, it also has quite an interesting history. Simply put, genmaicha is green tea mixed with roasted brown rice.

Note: The correct pronunciation starts off with what sounds just like the second syllable of “begin,” followed by the exact sound of the word “my,” and finishing with a simple “cha,” as in the cha-cha dance.

In old Kyoto, genmaicha was considered a drink for poor farmers and city dwellers who couldn’t afford expensive blends. Even people who were malnourished drank genmaicha because it is brewed with nutritious green tea and roasted rice, which makes it almost as filling as some foods. Monks who were fasting, soldiers with scant rations, and those who couldn’t tolerate solid food during recuperation from illness all turned to genmaicha for inexpensive liquid nutrition in times of need.

Kyoto was the birthplace of genmaicha, where legend tells of a tea farmer who mixed roasted brown rice (as a filler) in with his cheapest blends so that poor people could afford a pound of “tea” and get some extra vitamins and minerals along with the tea.

In modern times, the mild, grassy and nutty flavor of genmaicha has won over the entire population. Any grade of green tea mixed with brown rice and roasted the traditional way is considered to be authentic genmaicha.

Do It Yourself: Genmaicha Instructions

Why not save some money by making your own genmaicha tea? It’s easy and fun to experiment with different strengths until you find the exact combination of rice, tea and water that suits your personal taste. Here’s how to do it:

Roast about one cup of brown rice in a saucepan over medium heat, being careful to stir the grains of rice for an even browning effect.

Set the rice aside and prepare one cup of hot water at about 82C or 180F.

Place one tablespoon of roasted rice and one teaspoon of green tea leaves into a tied-off filter or sieve.

Plunge the filter-bag or sieve into the cup of hot water and let it steep for about 2 or 3 minutes, depending how strong you like your tea.

Try without sweetener or add a bit of sugar, honey or lemon for taste.

Dispelling a Few Myths about Genmaicha

Live everything new to the global marketplace, there are a few pieces of misinformation floating around that could stand to be addressed. Here are some facts about genmaicha tea that every consumer should know:

Often called “popcorn tea” genmaicha contains no corn. However, a few grains of the brown rice do pop during the roasting process.

Genmaicha contains very little caffeine and is much less acidic than other teas because of the starch from the rice. Contrary to popular belief, genmaicha does not “induce sleep” but is okay to drink at night because of its minimal caffeine content.

The liquid tea itself does not contain rice, as do many soups and hot drinks in the West. The rice kernels are steeped alongside green tea and filtered out before they reach the cup.

Genmaicha is not brown like the rice it contains, nor is it green like its base-content tea. After steeping, the colors combine into a light yellow hue, which is why some Japanese informally call it “yellow tea.”

The tea contains a range of antioxidants as well as ascorbic acid, both of which are thought to aid the immune system.

The green tea in genmaicha helps to regulate blood pressure and fight against hypertension.
Regular consumption of genmaicha has been shown to assist physical relaxation due to its theanine content. Other studies have suggested that the drink might help decrease a person’s chance of getting cancer or heart disease.

Despite the fact that it contains rice before filtering, genmaicha tea contains no calories.
Many bars in Japan, the U.S. and Europe sell a popular cocktail that contains vodka and genmaicha, two tastes which seem to work very well together. Hot rum is another bar offering that is paired with genmaicha for a unique flavor combo.

Genmaicha tea is okay for people who take iron supplements, contrary to widespread rumors. However, because green tea does slightly interfere with the body’s ability to absorb iron, anyone using an iron supplement should take their iron about 4 hours before or after drinking any type of green tea, including genmaicha.

Genmaicha and other green teas can assist the body’s glucose maintenance systems by reducing overall glucose levels, thus making it safe for diabetics.

Other ailments that are thought to be remedied by genmaicha include rheumatism, arthritis, dry skin, tooth decay, skin wrinkles, water-weight buildup, lack of mental focus, a weak immune system, and low energy levels.

Because it has less caffeine, tastes less acidic than most teas and seems to be a natural dieting aid, genmaicha is taking off as a culinary trend in the West, with U.S., U.K., and even Russian retailers now stocking Japanese imports direct from Kyoto and other Japanese cities.

The Future of Genmaicha

The matcha tea craze that began several years ago is related to genmaicha’s rise in popularity. Many of the larger online tea retailers sell a combo beverage that the Japanese call matcha-iri genmaicha. In English that means “matcha tea mixed with genmaicha” and it has a flavor stronger than regular genmaicha and is more green than yellow.

Unlike some of the pricier kinds of Japanese teas on the market, particularly matcha, genmaicha is very affordable. All the major online sellers carry it, as do the tea shops in major cities around the world. Consumers all over the world are beginning to discover the soothing, delicious wonders of traditional Japanese genmaicha tea.