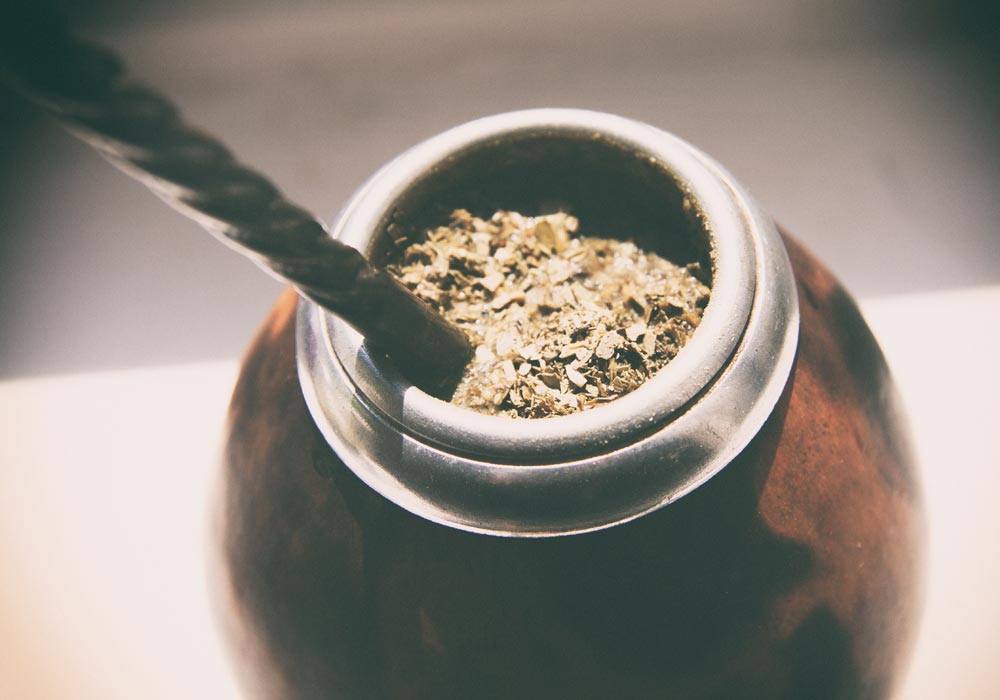 A famous tea drinker once wrote, “There are more things in Heaven and Earth, Horatio, than are dreamt of in your philosophy.” A modern speaker might be referring to the seemingly countless varieties of tea. It’s a long journey from Paraguay to Japan and then to Tibet. But anyone who appreciates a little yak butter, South American holly leaves and tea made from twigs will gladly sign on for the trip.

Lovers of Japanese matcha tea are often willing to experiment with other interesting blends from faraway places. It is a fact that matcha tea, kukicha, yerba mate, and Tibetan butter tea all contain caffeine in varying amounts. On the low end of the caffeine-o-meter are kukicha and matcha tea, both of which have between 20 and 30 mgs of caffeine per serving. Tibetan yak butter tea is slightly higher, at about 40-50 mgs depending how it is brewed, and yerba mate comes in at just over 60 mgs per 6-ounce serving.

Each one of these exotic teas has a colorful history, and has arrived on the modern world stage through wildly different routes. Note that yerba mate is, according to purists, an herbal drink and thus not technically a tea. (Those darn purists always try to spoil the party). What exactly are these drinks with unusual-sounding names? How are they prepared, and what types of rituals surround them? Let’s take a closer look at each one.

(the second word is pronounced mah-tay, and sounds sort of like latte)
Yerba mate is an herbal tea that comes from the leaves of the South American holly plant. Aside from Paraguay and several nearby nations, the drink is wildly popular in Syria. Leaves and twigs from the plant are put in a pot and steeped with almost-boiling water. The drink has a quick caffeine effect, and is often used as an ingredient in sports and energy drinks. The locals in Paraguay and surrounding regions pass a full gourd of the stuff around the table and drink it from a metal straw. Most yerba mate enthusiasts add sugar and are careful not to boil the water, otherwise it’s too bitter to drink. Mate tastes a little like weak green tea to the uninitiated. Matcha tea drinkers will never mistake yerba mate for Japan’s king of green teas. The two are worlds apart in almost every way.

Japan’s incredibly healthy kukicha, which is also known as twig tea (no relation to that 1960s supermodel), boasts a unique history and an amazing nutritional profile. Unlike its higher-grade cousin, matcha tea, kukicha uses only the twigs and stems of the tea plant. It is nutty and sweet, as you might expect, and is also green. Kukicha contains plenty of nutrients, like copper, manganese, selenium, and zinc. It also has large doses of vitamins A and C, plus B-complex vitamins, the first two being powerful antioxidants. This simple drink has more calcium per ounce than cow’s milk! Twig tea is sold online and in most retail grocery stores. Many people drink it for its low caffeine content and super-high amounts of vitamins and minerals, as well as the unusual, unique “outdoorsy” taste.

In the windswept highlands of remote Tibet, shepherds and their families drink very strong black tea that has been aggressively boiled and then churned with yak butter and salt. This ancient elixir has many beneficial effects. It prevents chapped lips (an occupational hazard for highland shepherds on windswept hills), fortifies the body for working in a low-oxygen atmosphere, and boasts a modicum of caffeine for alertness. The butter fat provides caloric energy for those hard-working Tibetans, and the salt helps them maintain anatomical electrolyte balance. There’s a lot going on in a cup of yak butter tea, which is why Tibetans drink it by the gallon. Some nomadic tribal people are thought to consume up to 40 cups per day!

Butter, salt, and tea. What’s not to like? Tibetan brick tea from the region of Pemagul is boiled for several hours and then stored for later use in the butter-and-tea mixture. It is not the stuff of tea ceremonies, but this drink has been around for centuries and is truly a fuel for those who live at high altitudes and lead strenuous lives. Locals call the drink “po cha” and say that it dates back thousands of years to Ayurvedic cultures.

If you’d like to give a go at making some po cha, here’s a serviceable recipe that substitutes standard butter for yak butter. [Note: Our research team has discovered that authentic yak butter appears now and again on major online auction sites, so be alert and maybe some of this rarity will end up in your kitchen.]:

Boil the tea in the water for about 3 minutes and then strain it. Put tea and all other ingredients into a blender, on high setting, for 3 to 5 minutes.

Be ready for a taste that you have never encountered. Some people like to place a cup of hot yak butter tea on a coaster and let it cool. Seriously, it is an acquired taste and many yak butter tea aficionados say that the drink can become addictive. And unless you spend long hours walking and shepherding and such, the calories in butter tea do indeed add up.

Interested parties can easily locate very good kukicha and yerba mate at tea and coffee shops, and from tons of online stores. Authentic yak butter tea is a tough nut to crack, as they say in the nut-cracking business. You can assemble most of the ingredients but will likely have to substitute something for the yak butter. The recipe above will at least be a starting point. Note that matcha tea and kukicha (twig tea) are both of Japanese origin and are very low in caffeine. Other than that, the two couldn’t be more different. Yerba mate is the new commercial star of the bunch, at least relatively speaking. Those who are ready to move on from drab commercial teas and coffees that are nothing more than clones of each other and have no real cultural pedigree will be happy to welcome yerba mate, kukicha and Tibetan yak butter tea into their lives. There are few better ways to enjoy the moment.