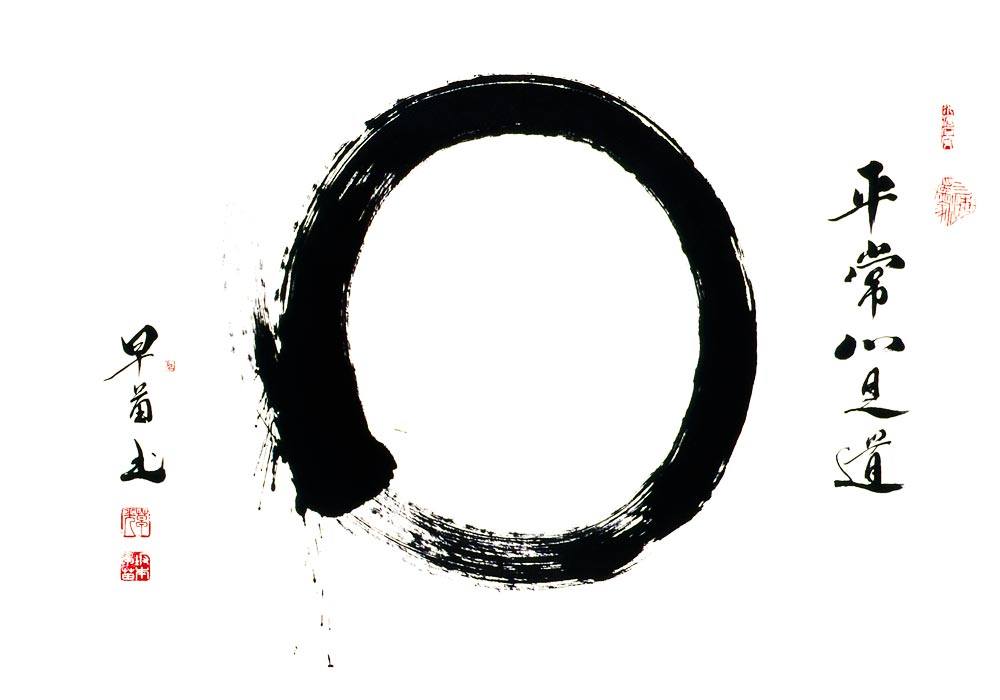 Examples of artistic calligraphy are everywhere in Japan; Museums, offices, matcha tea ceremony rooms, hotel lobbies and countless other locales feature not only “historic”-looking scrolls, but modern works of art that incorporate calligraphy in unlimited ways.

Even so, there is a dearth of understanding about calligraphy among Westerners, and many myths persist. The stylistic art form has an interesting history. Newcomers and neophyte enthusiasts would do well to discover what calligraphy is and is not, learn the basics, and find out where to go for more advanced instruction.

Calligraphy (“shodo” in Japanese, which means “the way of writing”) is both a writing method and an art form. Borrowed from China’s similar practice in the fourth century, Japan developed its own styles and teachers about 300 years later, when a unique Japanese writing system appeared. For centuries, Zen Buddhism and calligraphy were nearly inseparable practices, one reinforcing the tenets of the other throughout most of Japanese history (see “The Zen connection” below).

Today, Japanese school students learn the basics of calligraphy and high schools offer the subject along with art and music as an elective for those who want to delve deeper into the practice.

Beginners often hear the same old myths that end up discouraging them from even taking up the practice of calligraphy. Here are the most common ones, corrected:

Left-handed people can’t do calligraphy, and even right-handed people who have poor handwriting will not excel at the art Nothing could be further from the whole truth of the matter. Even in ancient times, many of the master calligraphers wrote with their left hands (one of them, it is believed, only had one arm, and it was his left arm). Modern writing instruments are made for right and left handed practitioners, so there is no truth to the lefty stuff.

As for those with horrendous penmanship, calligraphy is the art of manipulating tools, not writing in the conventional ways as we do with pens and pencils. A set of quality calligraphy instruments obliterates any traces of sloppy handwriting.

It’s expensive Money might be a factor for those who want to take up some kinds of art, but calligraphy is not in that category. A quality set of tools and paper, and even a few good teaching manuals to get started, will cost no more than the price of a couple theater tickets. Calligraphy is really a dirt cheap hobby; ink is inexpensive, the tools last for years, and paper can be recycled and repurposed from other activities.

To get good at calligraphy, people have to take classes Calligraphy can be a solitary learning experience if you want it to be. Classes at community colleges and from local teachers are typically inexpensive in any case. But armed with online video access, a couple of good texts and your own desire to succeed, classes are not necessary at all.

Hints and tips or beginners

There are three basic things to learn about before jumping into the actual art of calligraphy. Spending a few hours learning the terminology and basic strokes will go a long way toward making your early days as a calligraphy student pleasant and encouraging.

Learn all the terminology associated with the writing instruments This will allow you to learn rapidly from books and online sources that often assume a beginner knows about tips, tines, vent holes, bodies, shoulders and bases, among other things.

Understand the importance of stroke Calligraphic writing is about component parts rather than the “whole picture,” especially during the learning stages. Follow the advice given in every text and delivered in every calligraphy class: do a few minutes of practice strokes before each lesson.

Find a comfortable way of holding your pen Experiment with lots of ways until you are able to draw lines and strokes without stress on any part of your hand or arm. There’s much more to holding a pen than this simple advice, but for beginners there is a lot to be gained from going slowly and being comfortable while writing.

Remember, you can get by with online resources just fine, but some very useful books and calligraphy sets are available at low prices and are excellent. Highly recommended are three:

Learn Calligraphy: The Complete Book of Lettering and Design, by Margaret Shepherd.

Calligraphy Kit: A Complete Kit for Beginners, by A. Newhall and E. Metcalf (This really is a kit, and includes pens, a lesson book, and ink. It’s a very inexpensive starter set at a good price.)

Calligraphy for Creative Kids (and adults too!), by Jim Bennett

Zen Buddhism has influenced nearly every conceivable art form and cultural trend in Japan, from matcha tea ceremony and Kabuki dance, to origami and modern architecture.

Ancient and modern tea ceremony participants are expected to view a work of calligraphy to clear their minds before starting the tea ritual. The relationship between Zen and calligraphy is complex, but most historians believe that the two influenced each other; and reinforced one another in subtle and direct ways.

When creating a calligraphic work of art, the scribe’s mind must be free of clutter. Errors cannot be corrected, so each stroke must be made in a state of mental and physical freedom. This of course is an ideal to be strived for by an advanced calligrapher; beginners often make mistakes that reveal their level of expertise and areas that need more work.

It is said that an experienced calligraphy instructor with a trained eye can spot a student’s lack of confidence, nervousness, reticence, anger and many other emotional states just by looking at the brushstrokes. When one puts brush to paper, there is a definite “moment in time” experience taking place; a Zen attitude of mindfulness is essential for the creation of quality script.

It should come as no surprise to students of calligraphy that the precise skill and honed attention of the calligrapher are but two areas where the art of calligraphy and the practice of Zen Buddhism meet face to face.