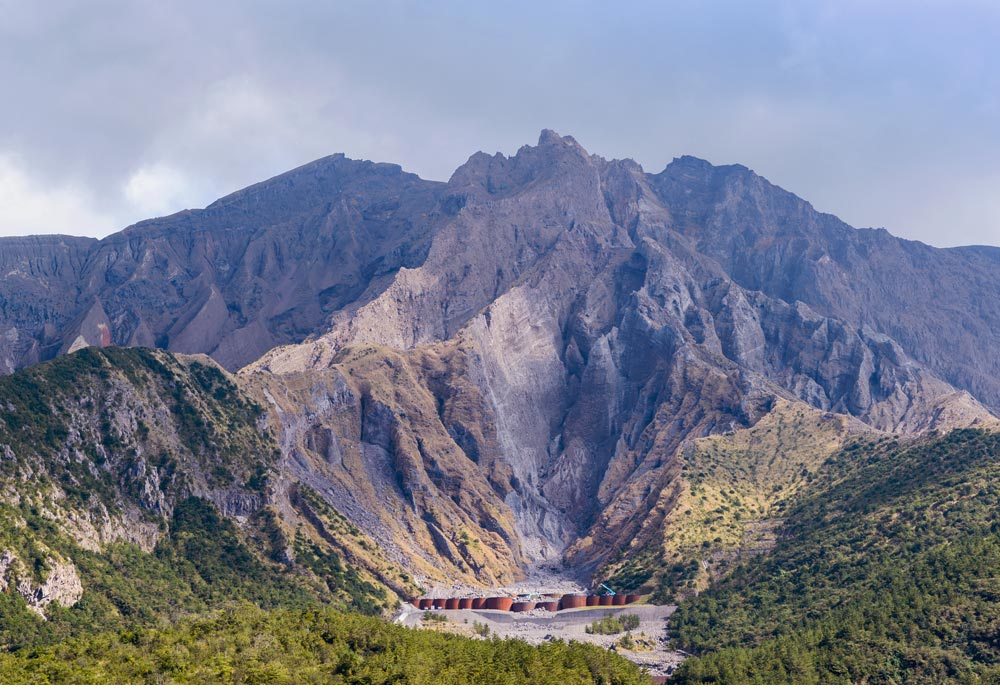 Japan’s northern and southernmost cities are a study in contrasting lifestyles, languages and attitudes. Completely unlike the nation’s capital, Tokyo, the two cities on Japan’s top and bottom offer unique perspective for travelers who want to gain a broader perspective on one of Asia’s most diverse cultures.

While technically not the southernmost inhabited point in Japan (Okinawa holds that honor), Kagoshima is indeed the last big city one will encounter on a trip south from Tokyo. Its tropical weather, a nearby simmering volcano, and unusual dialects are just of few of the things that travelers notice first.

The area is also renowned for its tea culture and solid tradition of highly qualified teachers of tea ceremony. Matcha tea is in fact grown in Kagoshima, whose climate is perfect for the crop. The rich volcanic soil (see below) is thought to be the ideal medium for producing the highest grades of ceremonial matcha tea; and the crop has been a key part of the city’s economy for hundreds of years.

Those who have studied Japanese language are sometimes stymied in Kagoshima by the local dialect, which even Tokyo residents say is hard to comprehend. Because Kagoshima is an international port city, however, there are plenty of shopkeepers and local people who understand a decent amount of English and Chinese. Serious travelers should consider hiring an interpreter for at least part of their trip.

The city is most famous, at least outside Japan, for its active volcano that sits smack in the middle of Kagoshima bay. The steaming, sputtering monster is a gorgeous lump of new earth that brings scientists, photographers and curious travelers from all over the world to this city of 605,000 residents.

As a matter of reference, most Japanese cities are described by their direction and train travel time from Tokyo. In Kagoshima’s case, the journey is due south and takes a full 7 hours, with stops.

About 467 years ago, St. Francis Xavier set foot in Kagoshima, beginning a long process of Japanese interaction with outsiders, not all of it friendly. St. Francis founded the first Christian missions there, which didn’t sit well with the local ruling clan, the Shimazus. The Shimazus were keen business people, and were among the first to build important trade routes between Japan and the outside world, primarily China and Korea. The city’s geography didn’t hurt either. Situated on a deep sea port amid a busy crossroads in Asia, Kagoshima soon became one of the most important economic centers in Japan.

Visitors typically mention three things as highlights of a trip to Kagoshima: a day trip to the volcano on Mt. Sakurajima; at least half of a day spent at one of the most beautiful gardens in the world, Sengan-en; a tour of the preserved historic district called Chiran, where several famous Samurai warriors once lived.

As recently as February, 2016, Sakurajima volcano erupted and spewed chunks of volcanic lava into the air, providing an incredible show to everyone in the city. The lightning and lava show (lightning often accompanies volcanic eruptions for reasons unknown) lasted for several hours and no one was hurt, but the Japanese Meteorological Society did issue a warning for local residents, advising them that they should be ready to evacuate is the eruptions continue.

By far, one of the coolest festivals in all Japan, a nation that seems to celebrate something every day, takes place on the fourth Saturday each July, in front of the Museum of the Meiji Restoration in Kagoshima. The Umbrella Burning Festival is like no other. Held after dark and featuring thousands of flaming umbrellas, singing and wild dancing, the event marks a strange battle that took place about 900 years ago. Apparently the attackers were unable to locate any proper torches, so they grabbed a canister full of paper umbrellas and set them aflame to guide the way. To see Kagoshima’s shore alit in such a way is truly magical. It is quintessential Japan in that it combines history, fire, samurai legends and dancing.

No trip to Kagoshima is complete without a stop at one of the many natural hot springs. The minerals and fragrant steam are good for the body and soul. Ancient travelers used to visit Kagoshima just to sit in the hot baths and relax.

Japan’s northernmost city is neither an icy outpost nor a one-horse town. In fact, the summers in Wakkanai are quite nice, and the city is home to about 37,000 year-round residents, many of whom are connected to the deep-sea fishing business.

Situated “atop” Japan’s northern island of Hokkaido, Wakkanai is home to Cape Soya, from which one can see Sakhalin, the nearby Russian island.

Wakkanai is a hiker’s dreamland, with ferry service to nearby islands that are home to low-rise mountaintops that are challenging for any trekker. Until just last year, there was even a ferry service to the Russian island of Sakhalin, but a funding problem halted the route temporarily.

Local tours through the outskirts of the city will seldom mention a key fact that the Japanese seem reluctant to speak of: Wakkanai was the primary submarine facility for the nation’s navy during WWII. Large and small subs were repaired there and also used the port as a launching area. Because of the city’s remoteness, Allied bombers were unable to reach it, thus making it an ideal submarine center.

Much smaller and more remote than Kagoshima, Wakkanai is nevertheless a haven for travelers who want to experience Japan’s less crowded environment. Known for its colorful summer wildflowers and strikingly scenic landscape, the town has a character all its own, is incredibly hospitable to visitors (even more than other Japanese cities), and offers by far the best seafood in existence. Crab and squid from the ocean shelf just off Wakkanai are highly prized all over Japan, and are exported to China, Russia and Australia year-round.

A trip to Japan need not be confined to Tokyo, Osaka and Kyoto. There is much more to the Jewel of the Pacific than its big cities. Visitors should consider the country’s north and south when planning a trip to Japan.