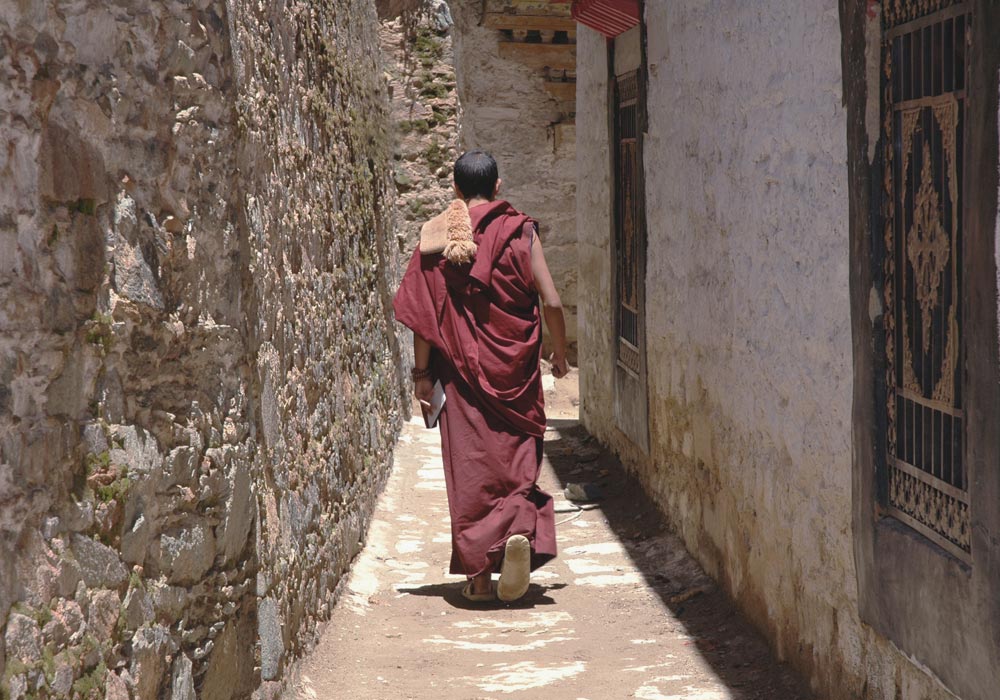 No one can pinpoint the exact date that Buddhist doctrines came from China to Japan, but the best guess is that the historic transfer took place in the year 538 A.D. The written record of the early contacts between China and Japan are lost in the mists of time, or were never written down in the first place.

For our purposes, in tracing the movement of Buddhism from China to Japan and looking at the state of the faith in Japan today, we need only have a general idea of when it began. Because after Buddhism arrived in Japan, it underwent the unique transformation that all other cultural borrowings experienced after entering Japanese daily life.

Because Japan is an isolated, sea-bound, ethnically homogenous nation, outside influences are eventually given a distinct Japanese imprint. That’s just one reason why Chinese religion, writing, music, and art became something quite different after landing on Japanese soil.

When, in that watershed year of 538, the leader of the nearby Kingdom of Korea presented Japan’s Emperor Kimmei with a gift of scrolls that featured the likeness and writings of Gautama the Buddha, Kimmei immediately asked his closest advisors whether Buddhism should be allowed in Japan. There was much infighting and argument among the emperor’s inner circle, but the most powerful clan, the Soga family, finally dominated the debate and Buddhism got the green light.

Shortly thereafter, a Chinese monk by the name of Jianzhen sailed to Japan and introduced Buddhism, taught students and basically got the religion off to a solid start. About a half-century later, as Buddhism grew in popularity amongst some influential Japanese citizens, the nation’s prince regent, Shotoku announced that Buddhism would be the new official religion for the entire nation. Shotoku himself was a Buddhist and by the year 604, the faith itself was enshrined in the official constitution, temples were built, monks were ordained, and the stage was set for a full flowering of Buddhism in Japan.

Both China and Korea are usually credited with bringing Buddhist thought to Japan around the same time, in the 7th century. Within Japan, the ruler Shotoku is referred to as the father of the nation’s Buddhist religion because if it were not for his early and fervent patronage, Buddhism might have had to wait another several centuries before it could make a run at establishing itself there.

Buddhism enjoyed royal patronage in Japan for much of its early and later history. During this heyday, matcha tea and the complicated ceremony surrounding it flourished. Later on, several emperors found fault with Buddhism, primarily because it wasn’t a home-grown belief system like the country’s own religion, Shinto. For many centuries Shinto and Buddhism coexisted peacefully.

By the 1500s, Buddhism was officially in decline, monks were being persecuted, and many important temples were destroyed. Edo Period shoguns, who ruled the country for almost 300 years, from the early 1600s to the late 1800s, dampened Buddhism’s influence and made it a secondary religion, forcing it to stand in the shadow of Shintoism, Japan’s native faith.

Japanese Buddhism broke into many sects over the centuries, most of which got their names from the historical period during which they arose. The three main ones that still exist are Nara, Heian, and Zen. The Zen sects have flourished both inside and outside of Japan and are quite similar to the Chinese sect called Ch’an. In fact, the pronunciations of the two words are nearly identical, whether spoken in Chinese or Japanese!

Currently, the most popular sect in Japan is so-called Pure Land Buddhism, which itself is represented by a pair of quite diverse sub-groups, Jodo Shu and Jodo Shinshu. After Pure Land in importance, the two Nichiren sects are also prevalent. They are called Nichiren Shu and Nichiren Shoshu. Zen comes in a close third among Japan’s Buddhist sects. In all, the religious landscape of the country is about one-third Buddhist, and two-thirds Shinto or non-religious.

Despite Zen Buddhism’s wide popularity outside Japan, the sect is but one of many within the country, accounting for only about 4 percent of the entire population. Christianity is almost as popular, with a 2 percent following. Considering that Christianity came to Japan quite late in the nation’s history and was all but eradicated by the militarists before World War II, it is surprising that it has continued to exercise any influence at all.

Zen, a distinct variant of an early form of Chinese Buddhism, nowadays calls Japan home. Having spread successfully to Korea, Vietnam, Europe and the United States, Zen is one of Japan’s best known spiritual exports. Today there are approximately 7 million devout adherents of Zen Buddhism in Japan.

Buddhism’s history in Japan has been a mixed one, with both good and bad years. But, no matter how hard the enemies of the faith tried, they never were able to eradicate it. Buddhism always came back. It is a testament to the faith’s tenacity that ritual ceremonies, like the ones centered on matcha tea preparation, have survived rather intact to the present day.

The Buddhism that is alive and well in Japan today doesn’t look much like the version that came from China almost 15 centuries ago. Not only has Buddhism itself changed, but the Japanese gave it their own imprint. At the same time, this quintessentially Japanese type of Buddhism, known as Zen, has spread all over the world. Other sects that are native to Japan have done well at home but haven’t traveled as well as Zen, which currently is taking hold in the Western cultural centers of Europe and the U.S.

As for Buddhism as a whole, Japan is one of many Asian nations that have a significant population of followers. Thailand, Cambodia and Myanmar boast the highest percentage of Buddhist populations. Each of those countries counts more than 90 percent of its people as followers of the ancient religion. In Thailand alone there are 55 million Buddhists, in Vietnam, 50 million, and in Myanmar, 41 million.