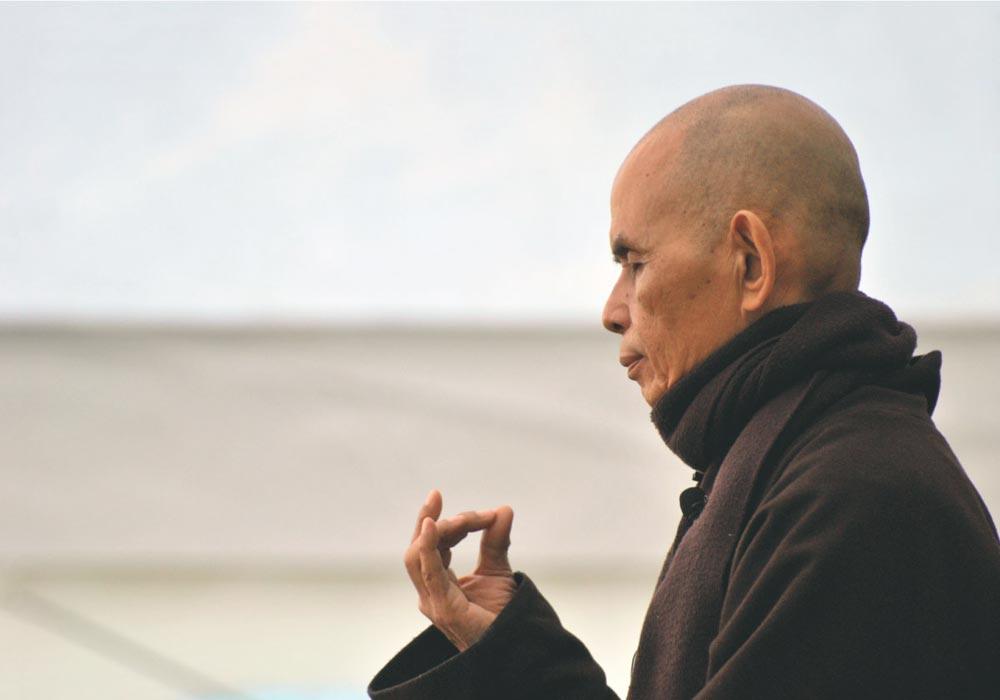 Buddhism is one of the oldest faith traditions in existence, and three of its most prominent leaders are still thriving and teaching well into their eighties. Bhante Henepola Gunaratana, the most visible and venerated of the Theravada monks, His Holiness the Dalai Lama, head of the world’s Tibetan Buddhists, and Thich Nhat Hanh, who leads active communities of Buddhists on several continents, are living legends. Quite different from each other in their approaches to the tradition and in the way they believe it should be transmitted to future generations, the three have been a significant force for good in a world that often seems stuck in neutral, or headed toward Armageddon.

What called these unique individuals to lives of service, justice and peace? Their diverse backgrounds, personalities and strengths are living examples for anyone who strives to make the world a better place.

Born Lhamo Dhondup in 1935, the future Dalai Lama earned a doctorate in Buddhist philosophy by the age of 23. He is the fourteenth Dalai Lama and had, until recently, dual religious and political roles as head of the Tibetan Buddhist tradition and as leader of the Tibetan government in exile. Currently, the communist Chinese government occupies Tibet, which they use as a dumping ground for nuclear waste and a site for political prison camps.

His Holiness, as the Dalai Lama is addressed, was born in a tiny peasant village in the northern part of Tibet and was identified as the reincarnation of the thirteenth Dalai Lama at the age of two. Four years later he entered monastic studies and today lives in exile in India.

His stoic devotion to non-violent change, even in the face of monstrous injustice to his people and their homeland, earned the Dalai Lama a Nobel Peace Prize. Notably, he was the first such recipient to make environmental goals part of his lifelong agenda.

Many people find it odd that His Holiness is an enthusiastic supporter of science and technology, especially as those disciplines touch on human psychology and brain research. He once made the astonishing statement, “If science proves some belief of Buddhism wrong, then Buddhism will have to change. In my view, science and Buddhism share a search for the truth and for understanding reality.”

This way of thinking is in stark contrast to most religious leaders, both past and present, Buddhist and otherwise. Typically, theological leaders are at war with science, primarily when it threatens to upend the authority of religious texts or teachings. In Christianity, for example, this war is currently being waged between Biblical fundamentalists and those who propound the theory of human evolution.

People often find it amusing that the Dalai Lama has a penchant for engineering and machines. He himself often says that he might like to have been an engineer or scientist rather than a monk! In fact, when he as a young boy he loved tinkering with and repairing movie projectors, and became quite skilled at the craft. That early talent shows even today in one of his favorite hobbies (besides gardening), watch repair. At age 90, and in excellent health, the Dalai Lama continues his life ambition to bring peace and mutual understanding to humanity.

Born on Dec. 7, 1927, Henepola Gunaratana is another Buddhist leader that still teaches as he closes in on the ripe age of 90. In the Theravada tradition, there is no formal leader as in Tibetan and other branches of Buddhism, but Bhante Gunaratana is certainly one of the more prominent persons among living Theravada instructors.

After a spate of early work in his home country of Sri Lanka, and later working in the slums of India with the poorest of the poor, Bhante G (as his followers affectionately refer to him) spent time in Malaysia before settling in the U.S., where he founded the Bhavana Society. The Society is both a retreat center and a monastery. Bhante G is credited with introducing millions of readers to Buddhism via his bestseller, “Mindfulness in Plain English.”

His primary avocation is administering the scholarship trust he set up for poor children in Sri Lanka and teaching about Buddhism to people all over the world. His autobiography, “Journey to Mindfulness,” is also a bestseller that has been used as a teaching tool for seekers on the Buddhist path.

Another writer of bestsellers about mindfulness, Vietnamese Zen monk Thich Nhat Hanh has a worldwide following. He has carved out a niche as a teacher of mindfulness and peace. One of his core messages is that human beings need mindfulness in order to live at peace with one another, and to attain serenity within themselves. Of his many bestselling books, “Being Peace,” and “Peace is Every Step,” are two that have had a significant impact on world leaders in the East and West.

Perhaps second only to the Dalai Lama in terms of sheer public recognition, Thich Nhat Hanh founded the largest Buddhist monastery in the West. Plum Village is in the south of France and is home to over 200 monks and monks-in-training, plus nearly 10,000 visitors annually. People from all over the world, and all walks of life, travel to Plum Village for retreats that teach various Buddhist meditation practices and disciplines.

Hanh’s publications number in the hundreds and include poems, children’s stories, and of course discussions of ancient Buddhist teachings. His dynamic way of bringing Buddhist thought, especially as it pertains to peace, to the world sets him apart from most theological scholastics in modern history. Some call his way “engaged Buddhism” due to its activist elements.

Indeed, Buddhism as taught by Gunaratana, Hanh and the Dalai Lama is a major part of the living tradition. Centuries ago, Buddhism and Taoism strongly influenced each other. For example, the drinking of matcha tea in Japan and China is considered an early Zen practice. Today, matcha tea is still a key component of Japanese tea ceremony, a ritual that is Buddhist at its core. The three living leaders of the Buddhist tradition were born in the early part of the last century, an era when tradition and ritual had clear links to the ancient ways.

As they approach their tenth decade of life, the three continue to “live peace” as Thich Nhat Hanh might say, and will certainly continue to be an example for all who believe in harmony and cooperation.