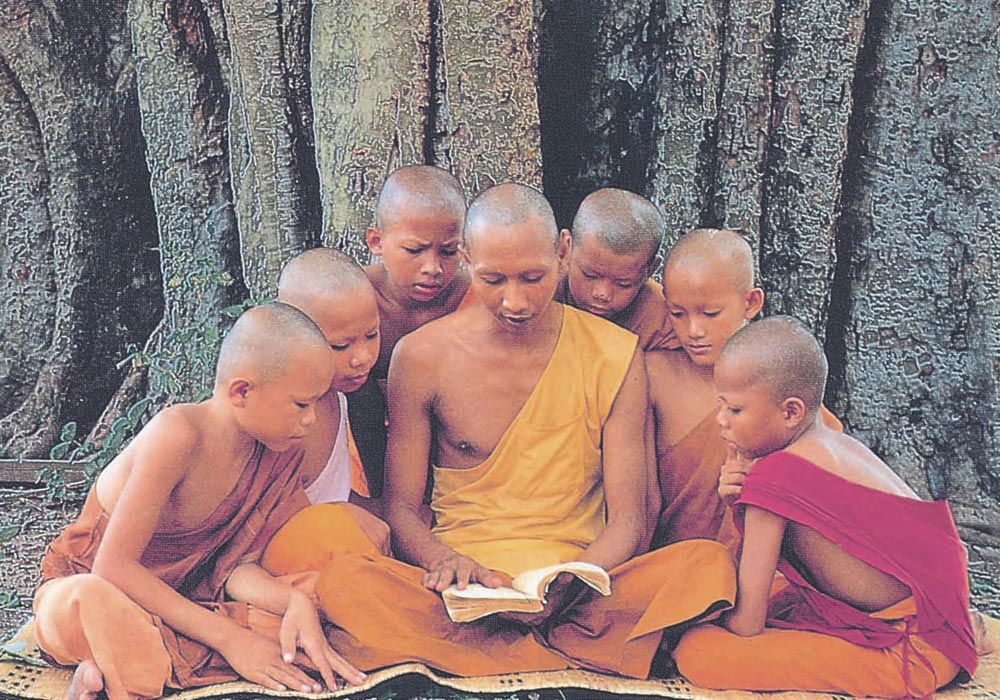 Perhaps no major faith tradition is more subject to misunderstanding than Buddhism. The world’s second-oldest religious belief system has undergone plenty of changes in 2,500 years and admittedly much Buddhist dogma is intended to be kept away from casual observers. The inner teachings that relate to meditation and mindfulness, for example, are typically revealed to adherents who pursue the path for at least a few years.

Even so, modern culture has fostered countless myths and flat-out misstatements about Buddhism, primarily relating to teachings about afterlife and reincarnation. What are the big myths that float around modern culture, mainly in the West? In no particular order, they are:

Myth: All Buddhists are vegetarians

Maybe the only thing that lives forever is this myth! Especially in the U.S., non-Buddhists are shocked and startled whenever they hear otherwise. Although many Buddhists are vegetarians, particularly in the East, followers in the U.S. and Europe tend to be pretty evenly divided on the practice. Shrouded in incomprehensible translation among ancient texts is the fact that the Buddha himself may very well have eaten pork for his last earthly meal. Some modern Buddhists believe that it’s okay to eat meat as long as they do not witness the animal’s killing. To say that Buddhists are vegetarians is akin to saying that Christians don’t drink alcohol. Some do, some don’t.

Myth: Buddhist “nirvana” is the same as Christian heaven

Most mainstream Christian sects view heaven as a place where personal identity will be maintained and where the ultimate desires are met. The basic definition of nirvana involves the loss of personal identity and the cessation of desires. And this is not just a semantic argument. Etymology speaks volumes on this topic. While nirvana means “extinguishing” (as of desires), heaven means “sky” or possibly “bliss” (experts disagree). In any case, they are not the same thing.

Some Buddhists believe in reincarnation, most don’t. Most do believe in rebirth, which is a whole different story. Reincarnation refers to a constant identity that travels from life to live. Rebirth does not imply a carryover of memories or emotions, but rather an essence of “tendencies,” a word sometimes interpreted as “karma.” Modern literature and that great abyss of misinformation known as Hollywood are mostly to blame for this one.

Myth: The Buddha was a god, and/or Buddhists pray to and worship a god.

Wrong, and wrong. The Buddha himself was a person. More importantly, he never claimed to be anything more. Siddhartha Gautama did, however, achieve enlightenment. Buddhists follow a path and do not worship a god.

Myth: Buddhists tend to be liberal, or leftist, politically

Again, a comparison to Christianity is appropriate here. The huge diversity of sects and cultures that comprise both Christianity and Buddhism follow no sole political trend or leaning. In the U.S., to cite but one example, Buddhists vote conservative, liberal and independent at the polls. In India and Sri Lanka, many of the conservative parties are largely populated by Buddhists, while in other parts of Asia the reverse is true.

Myth: There is a uniform “Buddhist code” of belief

Nothing could be further from the truth. Think of Judaism or Christianity and this statement’s falsity becomes apparent. Mormons, Roman Catholics, Eastern Rite Catholics, Presbyterians, Anglicans, Lutherans, Jehovah’s Witnesses, Adventists, Baptists, Methodists and dozens of other sects are all Christian but have little in common with one another. While there are but three main sects in Buddhism, each is further subdivided into offshoots much the same way as Jews, Christians and Muslims belong to numerous sects with different rules and beliefs.

Depending on the particular sect, meditation plays either a larger or smaller role in the life of a Buddhist. Even so, the idea that many outsiders have seems focused on meditation. Buddhists are no more “focused” on meditation as the center of their faith than Christians or Jews are on prayer. Meditation is a means to achieving an end, but not the center of the Buddhist faith. However, for contemplative orders of monks, both Buddhist and Christian, meditation and prayer definitely play a larger role than they do for everyday followers.

Myth: The Four Noble Truths and Eightfold Path are just like the Christian Commandments

Thou shalt not make incorrect comparisons. The Christian Commandments are a specific listing of what to and not to do in order to live a worthy, fulfilling life. The Four Noble Truths of Buddhism are merely a statement about the condition of life, the origin of suffering and how to become free from it. The Eightfold Path suggests a way of approaching life in order to eliminate suffering and to become more conscious. They are suggestions, not admonitions. Perhaps a general comparison concerning the ideas of “not killing, not stealing, not engaging in sexual misconduct, and not lying” is obvious. But if you put the Commandments side-by-side with Buddhist scripture, there’s really not much the two have in common.

Myth: Buddhism is a philosophy, not a religion

You hear this one at coffee houses a lot, usually from college students who are swept up by a trendy distaste for anything that reeks of “organized religion.” The fact of the matter is that social scientists, anthropologists, historians, philosophers and census-takers consider Buddhism to be one of the six religions of the modern world. In fact, there are quite a few vastly different philosophical schools within Buddhism, just as there are within Judaism, Islam and Christianity.

Myth: Buddhists attempt to contact the dead through rituals

Sadly, there are even urban legends and widespread misinformation about Japanese tea ceremony, in which matcha tea is part of a complex and ancient ritual that began as a Zen Buddhist contemplative practice. Matcha tea, simply as a beverage, has come into its own recently, but the ritual of tea ceremony is still rather clouded by misunderstanding, especially in the West.

Anyone who wants an unvarnished view of Buddhism can turn to a number of books or online resources for the straight facts. A good place to start is Buddhanet, a sort of cyber clearinghouse of facts and figures about Buddhism.