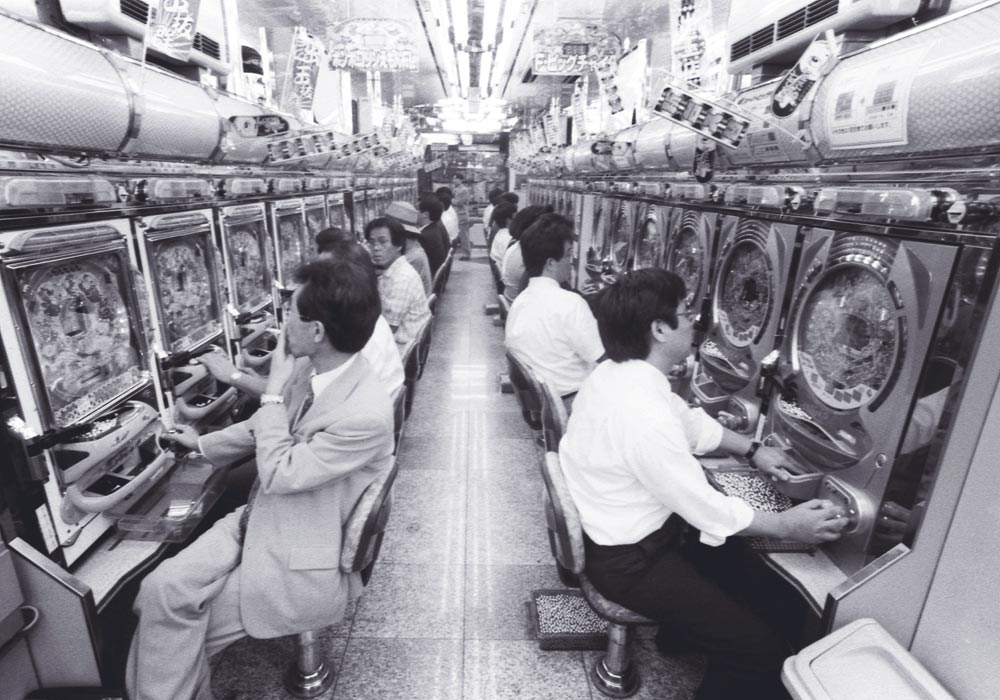 What are pachinko and J-pop?

Simply put, pachinko is a game that looks a lot like pinball, but with a Las Vegas, pool-hall twist. So-called “pachinko parlors” pack hundreds of machines into the smallest possible space. Each machine is a little different, but play is pretty much the same for all of them. (See “how to play pachinko” below).

J-pop is a very eclectic music form that has roots in the early rock groups of the 1960s, especially the Beatles and Beach Boys. Other influence strains found in J-pop include soft-rock, alternative, club pop, and synthesizer rock. In practice, it’s mainly the combination of upbeat music sung in Japanese but with lots and lots of English and pseudo-English words.

Lovers of authentic Japanese rock and traditional culture in general despise J-pop for obvious reasons, but particularly because much of it sounds amateurish and unprofessional. In spite of this opposition, J-pop is a financial powerhouse in Japan and nearby Asian nations, with some of the area’s biggest celebrities having risen through J-pop’s ranks.

J-pop and pachinko have at least one thing in common: they are quintessentially Japanese in origin and practice. Korea, China and Malaysia have their own versions of each, but it all started on the mean streets of Tokyo and Osaka, Japan’s cultural epicenters.

Ironically, many pachinko parlors play loud J-pop music in the background as players work the machines in hopes of a big payoff. There’s something very Las Vegas about both J-pop and pachinko. Maybe it’s the nondescript noise that characterizes both; or the glitzy, show-biz veneer covering not-very-much underneath. Whatever the case may be, there is no molecule of Japanese society more bonded to the Las Vegas lifestyle as a noisy, J-pop infested pachinko parlor in downtown Tokyo.

Pachinko is not “gambling” (wink, wink)

A short walk down any big-city street in Japan is a good way to see at least half a dozen pachinko parlors, each one more glittery, buzzing, and noisy than the last. There are signs in various languages noting that the game is not gambling, and in fact no money is awarded to winners. Technically, that’s true; no money is awarded to winners while they are at the pachinko parlor.

But, after trading their metallic pellets for junky prizes at the counter, players can then wander across the street and exchange their merchandise for cold, hard cash. So, defacto anyway, pachinko amounts to gambling, regardless of what the signs say, or in what language they say it.

How to play pachinko

For those venturesome visitors who wish to play, here’s a quickie tutorial:
Bring headphones or earplugs; it gets super loud in pachinko halls.

Japan’s gifts to the world

The Japanese have given many gifts to the world, including the beautiful art of flower arranging, Kabuki theater, the Noh drama genre, matcha tea and tea ceremony, Zen Buddhism, and robotic science to name just a few. Pachinko, for those not given to addictive gambling, is relatively harmless but no great art form.

As for J-pop, it’s more like very sweet bubble gum that loses its flavor after a few minutes: delicious briefly, and then pretty blah. But Japan wouldn’t be Japan without the good and the bad, the artful and the dull, the epic and the transitory. If Zen Buddhism teaches any lesson, it is the acceptance of what is, without judgment. In that spirit, it becomes much easier to view both pachinko and J-pop as essential to the Japanese cultural landscape.