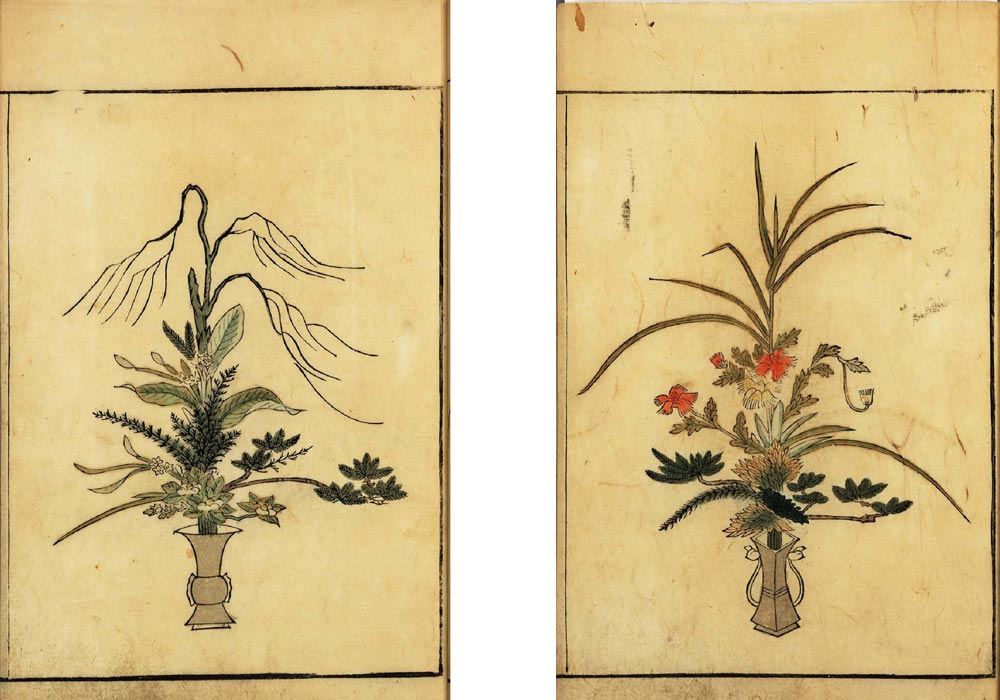 Ikebana is the Japanese art of flower arranging. It is also known by its other name, kado, which literally means “the way of flowers.” Many Westerners have heard of ikebana and assume that the English translation of the term implies simply taking a few flowers and artistically placing them in a pot.

Nothing could be further from the truth. The world of ikebana encompasses a multiplicity of art forms, a study of relationships, and a key element of the Japanese character.

Like matcha tea, wood-block prints, Shinto and other core symbols of the nation itself, ikebana is a uniquely Japanese expression of contemplative beauty. As is the case with formal tea ceremony, many Japanese study ikebana under private tutors for decades before they claim to comprehend the powerful messages that can be conveyed by a simple flower arrangement.

For those who have not encountered ikebana, or who just want a brief introduction to its basic elements, the following facts should be helpful:

The emphasis in ikebana is not on the flowers or the blooms, but on the leaves, the stems and the space in between.

Many principles of Zen Buddhism are expressed in a typical ikebana arrangement: minimalism, contemplation, simplicity, and emptiness.

In Japan, flower arranging began sometime in the mid-1400s, but soon afterward the art form crept into room arrangements for formal tea ceremony. Today, tea ceremony and ikebana are closely related, both in philosophy and practice.

A common practice is to use uncut flowers along with their original leaves and stems. Ikebana is more about untouched nature than the external beauty of a bloom.

The Buddhist contemplation on the impermanence of all things is central to ikebana, as blossoms, stems, leaves and all else eventually fade away. Many Japanese describe the art as a kind of meditation on the change of seasons and the passage of time.

More than 3,000 small and large ikebana schools exist in Japan, along with many thousands of private teachers and tutors. Countless Japanese list “ikebana” as a hobby on their social media pages.

Many practitioners of ikebana know the formal Latin and Japanese names of thousands of flowers, and the characteristics of each.

Some traditional ikebana masters and practitioners recite the Buddhist Heart Sutra in full before beginning a session. The sutra is said to calm the soul and make the body ready for receiving beauty. The Heart Sutra is rather long, but one of the pertinent passages is this: “Form is no other than emptiness. Emptiness no other than form. Form is precisely emptiness.Emptiness precisely form. Sensation, perception, reaction and consciousness are also like this.”

After a recitation or a bit of spoken instruction, ikebana is usually practiced in total silence.

Visitors to Japan who are interested in ikebana can visit the world headquarters of one of the major schools near Rokkakudo Temple in Kyoto.

One form of ikebana included more than flowers in its arrangements. The Chico variant uses all sorts of objects along with flowers, including dolls, shiny ornaments, vegetables and fruits.

Contrary to general perceptions about the art of ikebana, those who practice it tend to place equal value on blossoms, stems, seed pods, dried leaves, buds, and twigs. In the West, people tend to think that ikebana is all about beautiful flowers, but in fact the arrangement of natural, organic objects is the true heart of ikebana.

Advanced artists consider simplicity, asymmetry, and the use of space as the three most important parts of an arrangement.

Beginners are often advised to read a few books on the subject but then to take an in-person course with an instructor. In most cases, those new to the art form will practice what is called the “slanted” style of ikebana in order to learn basic patterns and concepts. Slanting flower arrangement lends itself to softer forms and is much simpler than what the Japanese call “upright” arrangements, which are considered to be rather difficult for beginners.

The dichotomy of ikebana is this: While creative expression is encouraged, there are a few basic rules that must be learned before one can allow inner expression to flow. Much the same way that painters study color mixing and technique in the early stages, ikebana artists-in-training try to master the fundamental guidelines of the craft.

If there is one overriding theme in the practice and philosophy of ikebana, it is minimalism. The “old masters” of the art typically produce breathtaking arrangements that are simple-looking in every way, yet somehow encompass a warmth and spirit that cannot be expressed in words.

Kado is the original Chinese name for the art that appeared in Japan in the 1400s. In this case, etymology is telling. Kado means “the way of flowers,” while ikebana’s literal meaning is “living flowers,” or “natural flowers.” More loosely translated, the Japanese word means, “giving life to flowers.” The Chinese used the art to study both nature and humanity. The idea that human beings are very much like flowers is central to the philosophy of ikebana and kado. As each flower lives, withers and dies, so does every human being. “As above, so below,” is the Western expression that pertains. As one works with the natural materials, one also studies oneself.

The connection between ikebana and tea ceremony dates to at least the early 1500s, when flowers were brought into the tea house as an integral part of the ceremony’s decorative milieu, along with wall hangings, matcha tea powder, and tableware.

When new, so-called “freestyle” ikebana appeared in the early 1960s, much controversy ensued. Traditionalists felt that the art form was being deconstructed by the Modernist movement and sought to recapture its early formality and beauty.

Those combative times are past, thankfully, and the practice of ikebana in Japan and even in the West is as healthy as ever. At least a dozen variations of the art are recognized by official Japanese experts, and one of them is the once-controversial freestyle school.

Ikebana, like many other components of Japanese art and culture, is grossly misunderstood in the West, for the most part. To scratch the surface of ikebana’s deeper meaning and true power reveals much. Non-Japanese can discern many things about the country and its people by investigating the simple, ancient art of flower arranging: ikebana.