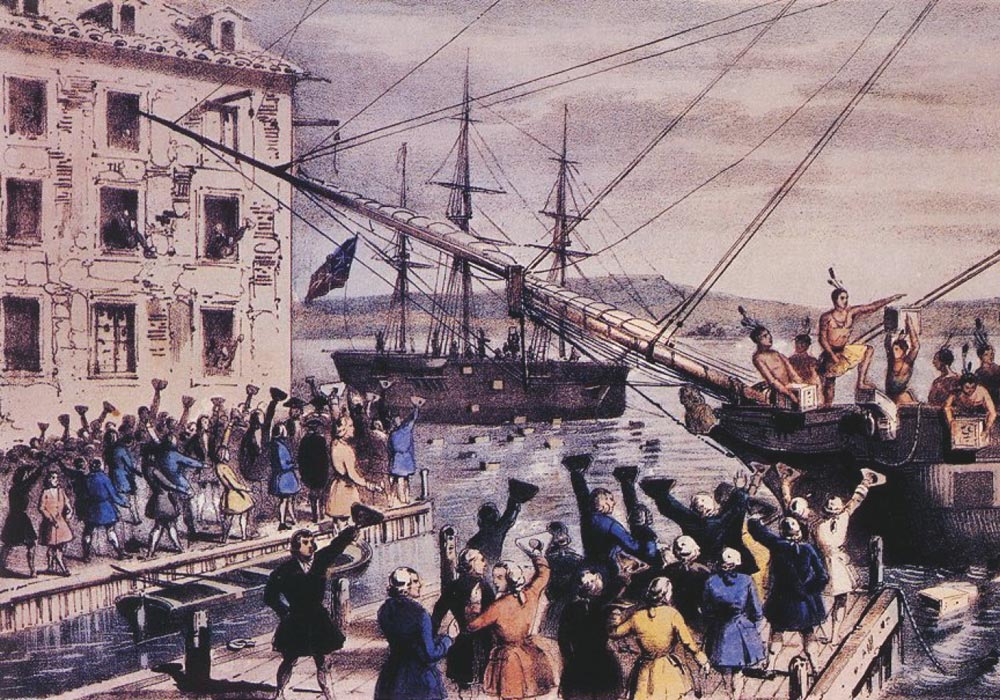 The Boston Tea Party, a primary spark for the American Revolution, was one of two mega historical events where tea was the driving force. About a half-century later, Britain and China fought the Opium Wars that again saw tea front and center in the global arena.

What is it about the world tea market that seems to inspire such deep feelings and have such profound effects on the course of human history?

It all began on a very cold December morning in 1773 when Samuel Adams and his Sons of Liberty revolutionary group gathered at the Old South Meeting House in Boston. About 5,000 members set out to plan what would be the first act in the American Revolution.

The world tea trade was thriving at the time, and the American colonists drank plenty of the stuff. The problem was that Britain dominated the global market through its East India Company. That meant the colonists were at the mercy of high British taxes on the tea.

When Adams and others tried to smuggle in tea from other suppliers in Europe and elsewhere, the British intervened and cut off supplies of all but their own products.

Finally, the colonists had had enough. Faced with British economic monopoly and the fact that the colonies were still denied representation in Parliament, about 150 men disguised themselves as Native Americans (to emphasize the idea that they were loyal to America, not Britain) and ransacked cargo ships in Boston Harbor.

The ships that the Patriots boarded were actually American vessels, but the tea that ended up in the harbor was Chinese tea owned by the British.

In those days, most of the residents of the colonies were not loyal to Sam Adams and his Patriots. In fact, about one-third of all residents of the colonies were loyal British subjects who were called “Tories” by the American Patriots. The Patriots made up about one-third of the population, while the remaining third was composed of neutral farmers and tradesmen.

Damage done by the ransacking consisted of 46 tons of tea contained in 340 chests, all of which was ruined by being thrown into the harbor. No damage was done to any of the ships (because they were owned by Patriots, who had no incentive to destroy their own property, only the British-owned tea).

There was no violence during the Boston Tea Party. No shots were fired and no fighting ensued, even hand-to-hand tussles. The whole operation was very well planned, with the goal of surgically destroying the tea and getting out without being caught. Later, one person, Francis Akeley, was arrested for his participation and served time in jail. He is the only known person to have been punished for the act.

The Revolutionary War did not begin right away. First, the huge crates of tea, which were beginning to smell, were cleaned out of the harbor. The British then implemented various legislative acts to force the Colonists to pay for the lost revenue. This led to widespread protests and eventually, on April 19, 1775 (16 months after the Boston Tea Party), the American Revolution began.

What began with a hundred or so men disguised as Native Americans throwing crates of tea into the harbor changed world history.

The early 1800s were a time when British citizens were developing a taste for all things Chinese, particularly tea and porcelain. Tea was expensive, but one hope of the government was to buy huge quantities of tea from China by exchanging British goods. The Chinese, however, demanded silver in exchange for their tea and porcelain. At first, the British government went along but soon decided that they didn’t want to deplete the national treasury’s silver stash. So, a cabal of merchants came up with a plan to get what they wanted from the Chinese.

The Tea-Opium war, part I

British traders decided to take massive quantities of opium from Indian growers, trade it to Chinese smugglers for tea and porcelain, and retain their own silver for future use. The idea worked. Because the British had full control over Indian at the time, they were able to send large shipments of opium to China for trade. When Chinese government officials decided to crack down on the illegal opium smuggling, the British responded with war ships in 1840 and forced an unfair trade agreement on the Chinese.

The system remained that way for about 15 years, but by 1856, the Chinese once again attempted to shut down the opium trade. Again, the British, this time with the French, invaded China and forced a series of extremely unequal trade agreements on the Chinese.

Historians point out that all the fighting and all the forced opium sales (and ensuing health problems for the entire Chinese population) were the direct result of the British government’s desire to bring large quantities of tea into the country.

The awful legacy of these actions by the British culminated in almost a century of widespread opium addiction in China, and the virtual decimation of an ancient culture that had existed for many thousands of years before the British Isles were even inhabited.

The Boston Tea Party and the two Opium Wars left indelible marks on the people involved. The American Colonists went on to found a new nation after great loss of life and property, while the Chinese were virtually enslaved by opium addiction for a hundred years. The battle to control the global tea market has not always led to such devastating consequences, but in these two cases it certainly did.

In modern times, there are no ground wars being fought over tea. However, the world tea market is huge and getting bigger. Matcha tea is just one of the many varieties of green tea that is growing in popularity all over the world. Every beverage company wants a piece of the action, so economic feuds will continue to take place.

In addition, matcha tea and other green teas are today at the center of a health debate that looks to fuel tea consumption even more. Regardless of how the medical studies turn out, human beings will continue to drink millions of tons of tea each day, so the potential for conflict is ever present.