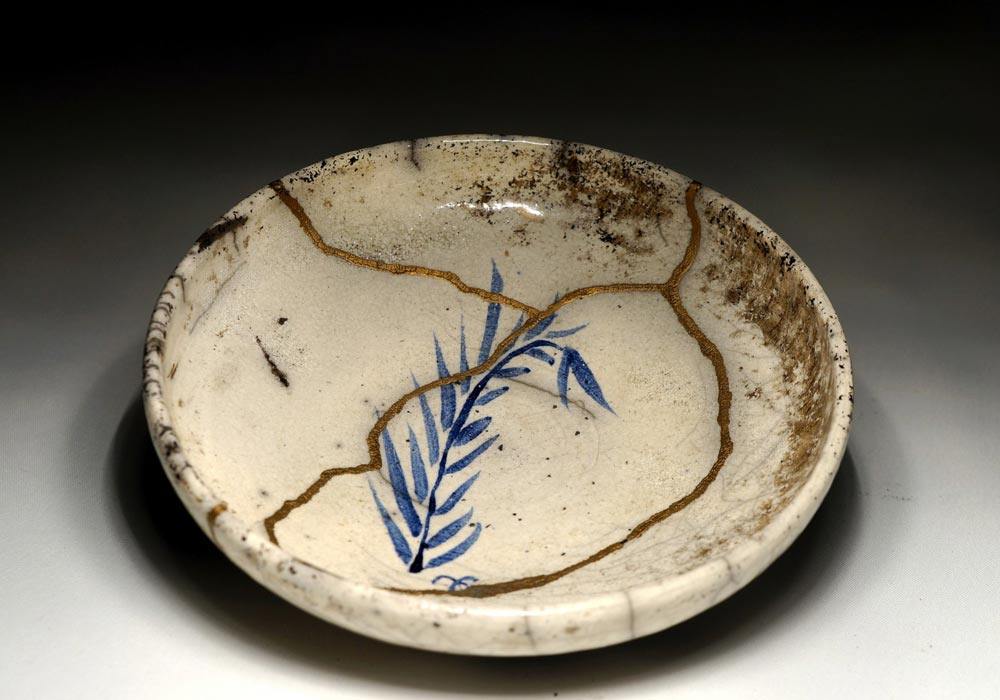 Kintsugi is a Japanese art of pottery which emphasizes brokenness and the worn nature of objects as being beautiful. For those of you coming here to learn how to say “beautiful in Japanese, this is it: Utsukushi-sa or 美しさ. OK, now that we’ve got this out of the way, let’s continue:

Kintsugi first originated centuries ago as a way of mending broken pottery, but it evolved into an art form all its own. It is an excellent demonstration of the principle of Wabi-Sabi, because Kintsugi objects show themselves as having a weathered nature which has been shaped into a new condition of beauty. The technique finds and amplifies the imperfections of the object it is applied to, showing us hidden layers of meaning that we would have missed without the restructuring of the ceramic. New additions of gold lacquer to join broken places highlight old flaws to give us an aesthetic experience of weathered beauty.

Wabi-Sabi is the idea that beauty is empty and transient, that imperfections call attention to nature and to artisanship more than a “perfect” object does. It is the key description of the beautiful in Japanese culture, and all major forms of art in Japan show strong influences of this. Kintusgi is a fine example of a type of art that brings this to clear fruition. It can also weld quite well into everyday life, and Kintsugi objects can be used like normal examples of pottery. The repaired pottery is restored such as to be literally functional, but the repair is also shaped into something new that enhances beauty in an incoherent way. The best examples of Kintsugi could sit on a table as a dinner plate or also be displayed in a museum of fine art, though they should be treated delicately and not be actively used or handled in stressful ways.

Kintsugi works by mending broken ceramics which have split into pieces. If a plate is dropped and shatters or cracks, its pieces can be reconstructed to create a plate which is more beautiful than the original one. The artist uses a gold lacquer to link together the broken pieces in the most common and straightforward approach, which leaves room for artistic intent and design to come out in the patterning of the gold lacquer. Another method is to replace an entire section of pottery which is missing with the lacquer, an approach which can be very beautiful by creating an off balance display of the lacquer repair which stands out far more. The gold lacquer glistens where the pot had once been whole, and the object now appears off balance.

It is also possible to replace a section of the pottery with a piece from another ceramic which purposefully does not match. The object again becomes useful, and it now emphasizes its weathered condition much more. The Kintsugi artist has skillfully brought out the nature of the vessel in a way that shows its limitations more than was originally the case, showing forth its beauty in a different context, as though demonstrating that the object went through heavy use and an experience of decay has made it become an item of fine art.

Kintsugi pottery then shows damage and wear and seeks to emphasize emptiness and impermanence as much as possible. By taking the broken object and mending it, the artisan shows us that the utensil we handle is rough with age and has been through changes. The fact that the object is usable in normal modes of living is inherently valuable in the Japanese view, and when we interact with the object we can better see that it will undergo a future of changing still more, as does everything in nature. Kintsugi then captures the real nature of life and shows us Wabi-Sabi in one of its finest forms.

Kintsugi combines usefulness and beauty into one object and aesthetic technique. Objects which have been repaired are again functional and can be used just as they were before breaking, though in practice they should not be used much, because they are delicate. Thus the everyday necessity of mending broken pottery has been made into an art by highlighting the transient nature of the pottery at hand. Just as the initial creation of the work of pottery involved a manipulation of natural materials such as clay or ceramic to make an item, further manipulation has shown us much more the changeable aspects of the eventually withered example of fine craftsmanship.

Hidden beauty is uncovered by enhancing the wear of the object, making it more Wabi-Sabi than it had been and returning the broken into a condition of everyday use which now amplifies its fleeting nature. Indeed, the usefulness of Kintsugi enhances our appreciation of its beauty, because we encounter beautiful things in an everyday way which fits the changing nature of the world rather than giving us a false illusion of something beautiful which tries to be apart from the world as do western descriptions of the beautiful.

This tradition has both a long history and a new series of developments. As a centuries old practice, it shows ancient Japanese traditions. Yet, as pottery changes, so does Kintsugi. Mending newly designed objects and newly fabricated materials leaves the artisan developing the technique further, and recent Kintsugi often shows a disposability of everyday pottery in a way that contrasts with how Kintsugi of a century ago showed extreme age in valuable ceramics, as overall trends. At the same time, the approach, techniques, and aims are very much the same as ever.

Japanese culture is highly influenced by this method of improving pottery just as it is influenced by the idea of Wabi-Sabi. It is important to note that pottery is one of the oldest examples of art from many societies. We know a great deal about ancient Greece through collections of fine pottery from millennia ago. So this medium has a special place in sophisticated civilizations. This may be due to pottery being both useful and beautiful even while it fits clearly with tradition, and Kintsugi is a way to refine how this sense of beauty and culture is captured within the functionality of a ceramic.