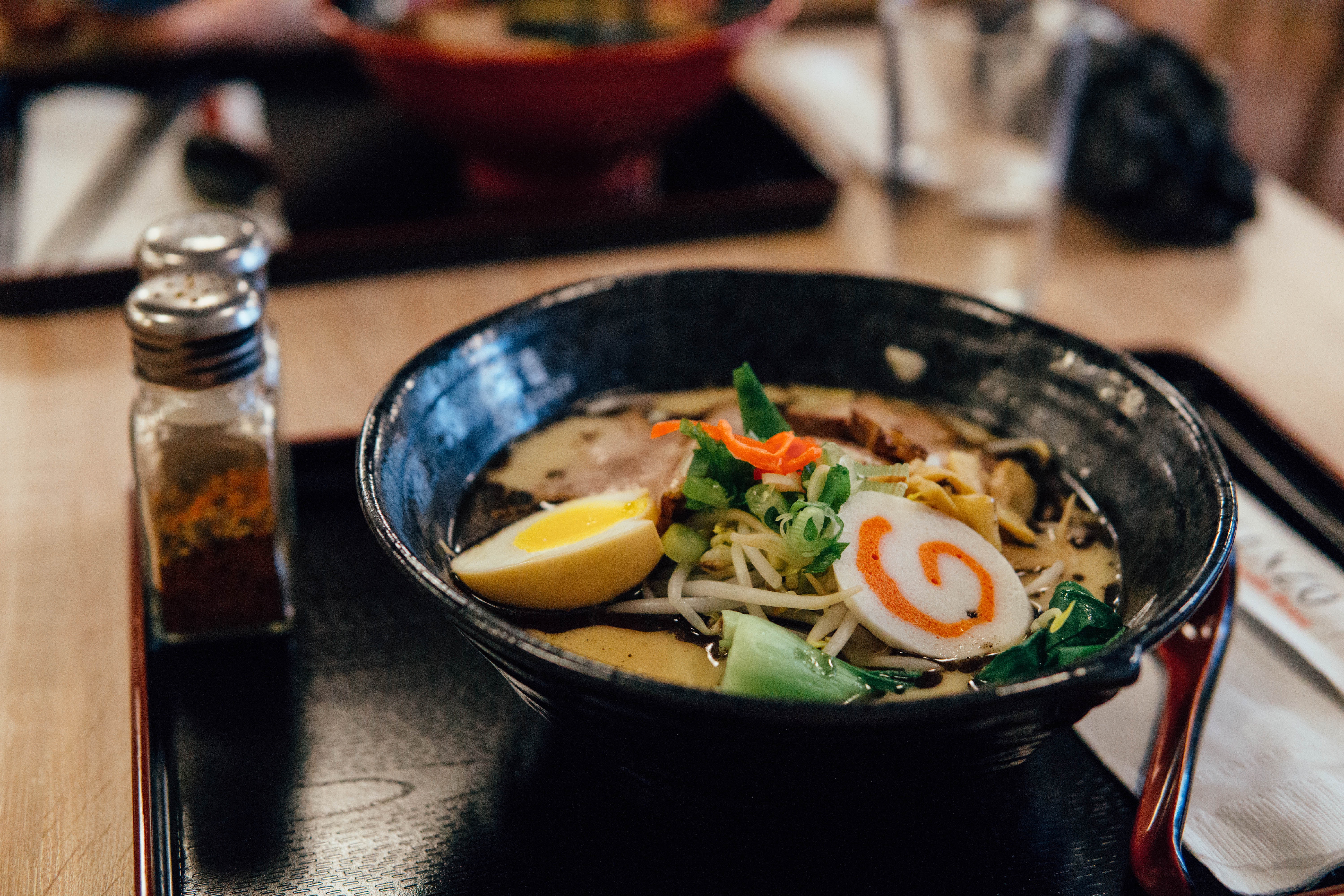 Ramen is the one Japanese food creation that nearly everyone has heard about. But have you ever wondered exactly what ramen is, how the noodles are made, how many different toppings there are, and where the best places are for eating this tasty concoction?

Of course, the answer to the question about the best places to eat ramen is simple: all the top ramen restaurants are in Japan. That makes sense. But where are they, what types of ramen do they specialize in and how did they become so famous?

The answers to all these ramen-related questions are included in the sections below, which start out by exploring a bit of “ramen history,” and then looking at the four kinds of broth, the different types of noodles, the most popular toppings, local variations in Japan, the trendy kinds of ramen in the big Japanese cities, and noodle manners (aka “ramen etiquette”) and finally considering the question of seasonings.

Another place for some great resources about all things ramen is the book entitled, “Simply Ramen: A Complete Course in Preparing Ramen Meals at Home.” The author offers up an intriguing discussion about these tasty noodles and shows how anyone can combine delicious sides, noodles, toppings, and flavored bases to create more than 70 different ramen meals.

Whether your preference is pork, chicken, beef, seafood, spicy or vegetable-based ramen, the book has it covered. There’s even a section on cold and specialty ramen as well as interesting facts about the origins of the food and where to find the best offerings in Tokyo.

There’s a lot to learn when it comes to ramen, so let’s begin.

Whenever people think about ramen, they tend to think of the Western packaged items that line store shelves and are a staple of college students’ diets. Sadly, massive advertising campaigns have taught many people about the lowest-quality version of ramen.

Authentic Japanese ramen is a filling, delicious and nutritious meal consisting of noodles in broth and containing one or more toppings and seasonings. That’s the most basic version, but it’s a far cry from the tasteless instant stuff in grocery stores. Homemade ramen prepared the Japanese way, is one of the best things you can eat. Here’s how it all started.

In the late 1800s, Japanese port cities started getting access to a Chinese import that consisted of hand-prepared noodles in broth. The ease of preparing the dish and its taste were key factors in making this unusual noodle dish a huge hit with the locals in Japan’s seaside towns.

Within a few years, the Japanese had created a home-grown version of ramen by altering the liquid base and adding all sorts of toppings to improve the nutritional content of the food. Sales began to take off, and soon the Japanese type of ramen was one of the best-selling items from street vendors’ carts.

This was all taking place in the early part of the 1900s, but by the time WWII had ended, thousands of American soldiers were stationed in Japan. They discovered the tasty dish that was already so beloved in Japan and brought it back to the U.S. After that, it was just a matter of time before the instant-food craze of the 1960s transformed ramen into a quick snack food that rapidly spread all over the world.

Don’t Forget about the Broth

If you order ramen in a Japanese restaurant, whether in Japan or elsewhere, you’ll quickly notice that there are four basic types of broth, tonkotsu, miso, shio, and shoyu. Of course, there are hundreds of variations, inter-mixed flavors, and regional creations (in Japan), but these are the main four broths for ramen. How do they differ from each other? Here’s how to tell the difference.

Shio is created from chicken or seafood alongside a bit of seaweed. The color of the broth is extremely light, tastes quite salty and comes from the Hakodate region of Japan. Some historians think this might have been the first variation that was completely Japanese.

Miso broth is newer and didn’t show up until about 1962 in Japanese restaurants. It has a nut-like and tangy taste. It’s made from bean paste and is one of the popular types of ramen broth in Sapporo.

Tonkotsu is from Kurume and is created from pork fat and also pork bones, with a little collagen mixed in. The broth is not clear at all, but rather cloudy.

Shoyu broth is the most popular of all, having grown popular in Tokyo decades ago. It is clear but a bit dark and its primary ingredient is soy sauce.

The Art of the Noodle

Ramen is much more than just a common soup noodle. In fact, Japanese cooks go to great lengths to differentiate between the various types of ramen noodles. And even though all are made from a special kind of water called kansui, salt, and either wheat flour or eggs, most enthusiasts classify ramen based on the noodle’s shape, thickness, and color. A final factor involves the amount of water used in making the noodle.

Matching specific types of noodle shapes to the different kinds of broth is considered somewhat of an art. For example, you’d never pair thick broths with wavy noodles. Likewise, no Japanese cook would use a thin broth with the straight type of noodle. It’s just not done, and the reasons have to do with “noodle buoyancy” and a couple other esoteric factors that are of great concern to cooks and ramen experts.

Most ramen enthusiasts let cooks worry about pairing noodles with the right kind of broth, or just use a standard Japanese cookbook. But when it comes to toppings, everyone seems to be an expert. Even the best ramen shops in Japan let customers choose their own toppings, just as you’d do at a pizza restaurant.

Customers in pizzerias seldom concern themselves dough and the preparation of the crust but are nit-pickers when it comes to toppings. It’s the same at ramen shops, where you can either decide for yourself or ask the cooks what toppings go best with the broths they sell. Many menus include “suggestions” about toppings in the same way that upscale restaurants suggest the best wines to have with various dishes on the menu.

There are literally thousands of combinations of toppings for ramen, but the main three that are available at most of the better ramen shops are the following:

Egg: These toppings include a standard boiled egg that has been carefully marinated in soy sauce or another version in which the egg is almost poached.

Meat: The Japanese tend to use pork as the meat of choice for standard ramen dishes. But the pork is prepared in a special way: first, it’s roasted in either sweet soy or another kind of sauce and then carefully sliced. Another way of preparing the pork is to cube it after braising. Other meats that are common ramen toppings include scallops, shrimp, crab, bacon, and mussels.

The Diverse Styles of Japanese Ramen

Every area of Japan has its own style of ramen. In big cities like Tokyo, even small neighborhoods have their specialties. It’s safe to say that there are at least 500 different regional ramen styles in Japan, possibly more. But the most popular ones are sold in all the big noodle shops and everyone is familiar with them.

The three primary versions of “regional” styles of ramen include Kitakata, Hakata, and Asahikawa ramen.

Kitakata has very wavy noodles that tend to be flat and wide. They keep their shape quite well in the broth because they’re made from fresh, spring water. Kitakata ramen also has the tendency to include a greater noodle-to-broth ratio than other regional styles of ramen.

Asahikawa ramen is a favorite in Hokkaido and consists of several different kinds of seafood. The tonkotsu broth is kept hot with a thin topping of grease. This dish does a good job of keeping people warm in cold weather climates.

Hakata ramen is the most common and most popular style in Japan and is a favorite of people who buy their midday or morning meals from food carts on the street. The tonkotsu broth topped with a special type of ginger that’s bright red and pickled.

The noodles are very thin and served firm. Most every Japanese restaurant in the world that serves ramen offers this style, among others. Hakata ward in Fukuoka is famous for pork ramen and many other unique food creations.

Like clothing, films and every social activity, ramen has its trends. In modern Japan, four of the most popular kinds of ramen include mazemen, abura soba, tantanmen, and tsukemen. Tsukemen is the most unusual because the ingredients are not combined, which means you will be dipping everything in the broth as you eat it.

Tantanmen, also called tanmen, uses a tangy sauce and Chinese-style noodles. Some Japanese consider this dish more Chinese than Japanese. Indeed, it’s much like the original version of ramen that came to Japan port towns in the late 1800s.

Mazemen is a joint creation of Japan and the U.S. because of an American cook/entrepreneur who uses unusual forms of noodles and toppings, typically salmon, other kinds of fish, and cheese.

Abura soba is a Sapporo style that became popular only in the past five years and consists of almost no broth and very thick noodles. Some versions include boiled eggs and oil from lobster meat.

A Few Thoughts about Spices and Seasonings

Many of the standard seasonings for ramen are put into the broth before serving. Some are added later, just before the dish is consumed. Some of the most common, added-in-later seasonings include flaked garlic, chili powder, fat, oil, sesame seeds, a Japanese pepper called sansho. Of course, each region has its own seasonings so the list of ramen spices is truly endless.

It’s a Japanese tradition to slurp noodles, but there’s actually a reason for doing so. More than just a social custom, noodle slurping makes sense. Because most ramen noodles become completely water-logged within about 6 minutes, diners are encouraged to eat the dish the second it’s served, even if your table-mate has not been served!

In addition to eating the noodles before they get soggy, the idea of slurping is good for another reason: slurping brings cool air into the noodle-broth mixture as you put it into your mouth. This allows you to more fully taste the food and helps cool down the very hot liquid before it can harm delicate skin around the lips and tongue.

Finally, when you dine in a Japanese ramen shop, it’s okay to request extra noodles if you end up with broth in your bowl. Some shops will give you a small portion of noodles at no charge, but some will add a small fee to your bill. If you want the extra noodles for your lonesome broth, just say to the server, “ka-eh-dama,” and they’ll bring you some additional ramen noodles.

Get Ready to Eat Ramen

Now that you know all the important facts about ramen, including where to find the best of the best on your next trip to Japan, why not try preparing your own ramen meals at home? It’s an easy way to bring a little bit of Japan right into your kitchen, no matter where you live.