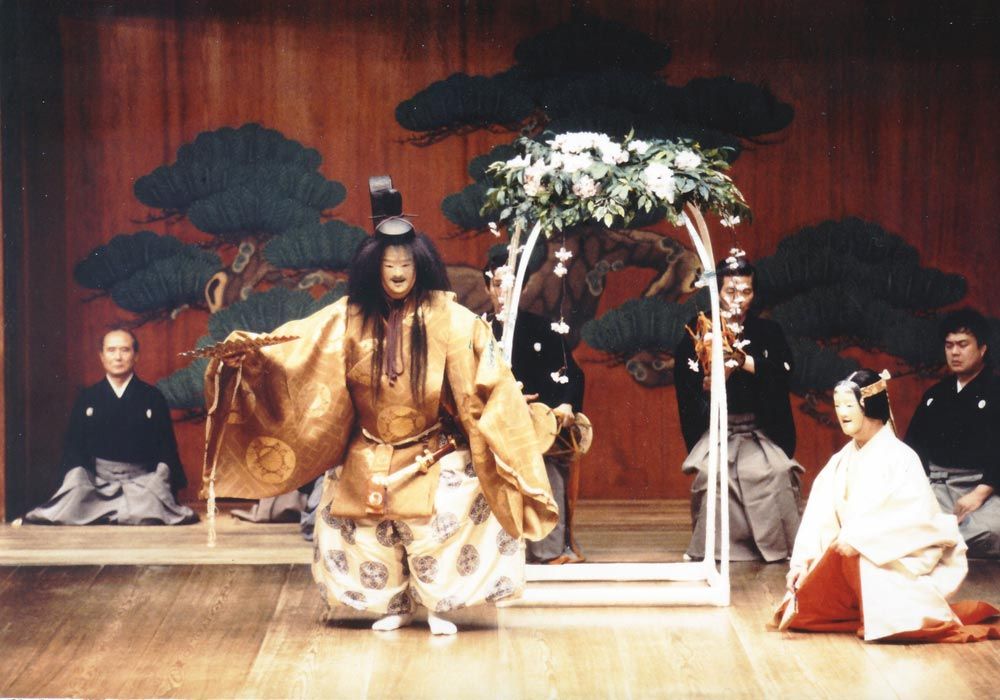 In many ways, Japan’s modern face is merely a disguised version of its collective traditions: tea ceremony, Zen Buddhism, calligraphy, flower arranging, Kabuki and Noh. Aside from recent Western influences, most of the country’s major social customs and popular pastimes can be directly traced to one of its ancient art forms or belief systems.

Nowhere is this fact more evident than in the spectacular, perfectly preserved theater arts known as Kabuki and Noh. Often categorized together under the “theater” sub-heading, the two are very different.

Both, however, are endlessly fascinating in their own ways; and each illustrates a unique aspect of the Japanese character. Modern Kabuki and Noh theater arts are a thriving component of modern Japan, each having survived for more than four centuries.

Travelers to Japan often seek out intimate cultural experiences that include visiting an authentic Noh or Kabuki theater, imbibing matcha tea in a traditional tea ceremony, or hiking up Mt. Fuji. There is much to do and see on a short trip to Japan, but visitors should at all costs attempt to see either a Kabuki or Noh performance, preferably one of each.

Before purchasing tickets, or when trying to decide between attending one or the other, get acquainted with the basics of Kabuki and Noh in order to better appreciate and enjoy the performances. Herewith:

Noh drama, along with a sort of “comedy interlude” art form called kyogen, began in the 1300s and grew to become the official national art ceremony, enjoying elite status among the royal family and warrior classes. The original four troupes plus a newer one are still in existence, and represent one of the oldest theater traditions on earth.

Shakespearean in a way, because many of its plots involve ghosts, fairies and dreams, Noh is characterized by very slow, poetic language and deliberate, symbolic movements. The actors wear elaborate costumes and portray people and events from history and literature.

The stage and performers

Stage design is set by tradition, as is everything else in Noh. Typically performed outdoors, all Noh stages are open-air squares; only the back wall is fixed. There is also a bridge that allows for entrance and exit of the actors.

Every performer in a Noh play is male, and there are only three roles an actor can play, four different tasks for the musicians, a chorus, and stage hands that are visible but not part of the actual performance. The shi-te (pronounced like the English word “she,” and tay, to rhyme with “pay”) is the lead part, and is usually an old man, a devil, a god, or some sort of spirit being. The supporting actor is called a waki, who always portrays a living person, usually a samurai, monk or priest.

Members of the chorus help the shi-te tell the story directly to the audience, while the musicians utilize a small drum, flute, hip drum and a tai-ko, also known as a stick drum. Western viewers are often surprised to see stage hands, dressed completely in black, handing props to the actors during a production. The unspoken rule is that anyone on stage and dressed in black is unseen, and to be ignored.

The main character wears one of several masks that reveal what type of person or spirit-being he is, and whether he is primarily good or evil. Folding fans are the primary props, and are used to represent any number of things, from an umbrella to a knife. Costumes are massive and intricate. Knowledgeable Noh enthusiasts can tell a lot from the type of costume a character wears.

Tokyo, Nagoya and Osaka are the main Noh theater locations in Japan today, though smaller towns often put on significant performances. A standard production, which includes the comedic interludes, usually lasts about 2 hours. An inexact, but useful pricing guideline is this: expect to pay about twice as much for a ticket to a Noh drama as for a standard movie ticket.

Not as old as Noh, Kabuki began in the early 1600s. Kabuki performances are primarily dances, with speaking and singing as integral parts of the story line. It its early days, Kabuki was considered wildly outrageous, the very word carrying meanings that imply “bizarre” characters or “avant-garde” renditions.
Today, Kabuki stands as the most popular of all the Japanese traditional artistic drama variations. Some call it an equal combination of theatrical performance and dance. Long known for elaborate costumes and expressive makeup, Kabuki was created by a shrine dancer named Okuni in the year 1603, when she crafted a unique combination of religious and folk dancing. After about 80 years of evolution, the dance form grew into a full-fledged theater movement.

Kabuki stories are often compared to soap operas. In fact there are about 200 fixed story lines used today by Kabuki troupes, focusing either on nobility or commoners. Nearly all the story lines deal with life in the 1500s or thereabout. As in Noh, all Kabuki actors are male.

Kabuki makeup is elaborate and revealing. The color and style of makeup tells the character’s main personality type and temperament. Musicians play drums, flutes and shamisen (a Japanese banjo), while they sing a narration for the audience. In Kabuki, the musicians are as important as the actors and provide emotional tone that is vital to the performance.

The main Kabuki theaters are in Tokyo, Kyoto and Osaka. Smaller cities often have theaters as well. Ticket prices for a complete production, which lasts several hours, can be pricey. A smart way to see Kabuki is to purchase single-act tickets, which are quite popular among Japanese theater-goers. Single-act admission costs about what an average movie ticket does.

Japan’s essence is tradition; its modernist, Western face is itself a kind of theater mask that hides the culture’s esoteric core. That core includes such things as the aforementioned Kabuki and Noh, as well as karate, judo, wood-block art, shamisen music and matcha tea. Westerners who visit Japan should keep in mind that the country, more than any other modern nation, is traditionalist at heart.