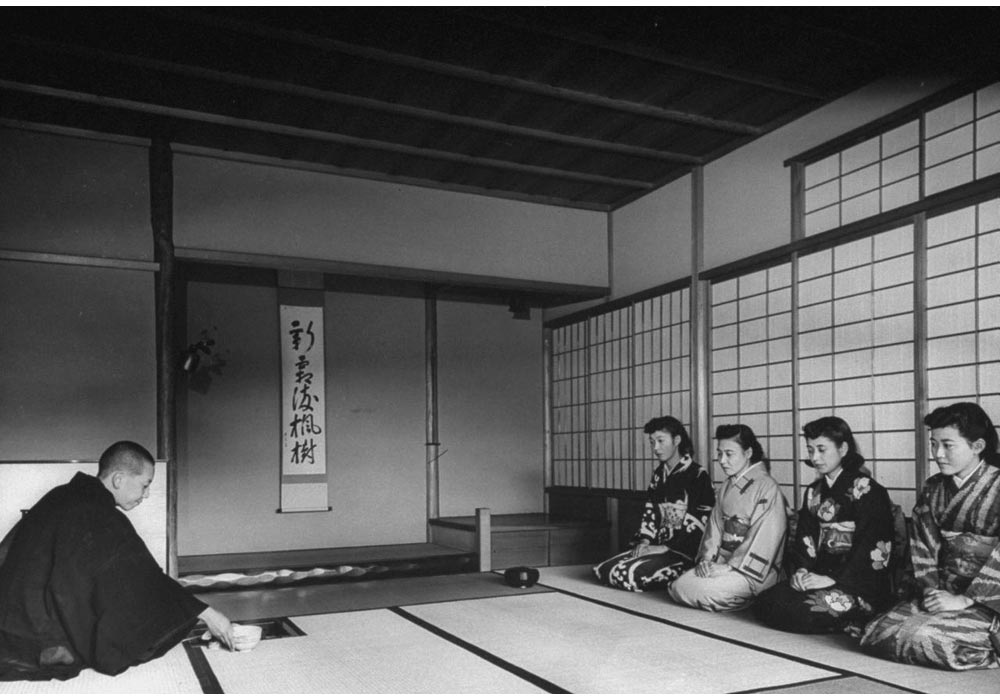 Anyone who attends a tea ceremony, whether they are Japanese citizens or tourists, should know about the formal tea ceremony etiquette. Even in rituals hosted in nations outside Japan, the formal code of conduct is typically followed rather strictly. Outsiders will usually be shown standard protocol before being allowed to attend an authentic ceremony. The matcha tea which is the center of the ritual holds many keys to the mysteries of this uniquely Japanese social event.

Keep in mind that there are “practice sessions” that non-Japanese can attend in order to learn the ropes. And in modern times there are formal tea ceremonies in Japan that are specifically intended for non-Japanese speaking guests. Some of these ceremonies provide translators, but some feature Japanese hosts who speak English, French, and other languages.

In a way, the ritual represents everything that Japan is, both its formality and its social restraint. As long as foreigners are willing to abide by the basic rules, they can learn much about what it means to be Japanese. Perhaps there is no better window into Japanese culture than the formal tea ceremony, which is built around the serving and drinking of green matcha tea.

What are the key things that one needs to know in order to behave properly at a formal Japanese tea ceremony?

Who are the guests and what does each do?

There are usually four or five guests at a typical Japanese tea ceremony. Each guest has a title. For example, the first and second guests are called, respectively, shokyaku and jikyaku. The last guest is called tsume. Of course, seating is strictly arranged and each guest sits in a particular spot in relation to the person directing the ceremony and serving the tea, known as the teishu.
As a first-time guest, you will not be designated shokyaku, because that person has a high responsibility during the ceremony. The shokyaku is in charge of communicating with the teishu. The room, called the chashitsu, is where all the social interactions take place. The roles of the teishu and the guests are pretty much set in stone, so as a guest you will usually be told exactly what to do, what to say and what to eat.

There are sweets to eat, but remember the main rule of tea ceremony for guests: Never, ever do or say anything that is not part of the ceremony itself. The shokyaku will help you discover what your role is during your first time as an attendee. Always follow the lead of either the interpreter or the shokyaku.

As a guest, you need not know all the intricacies of what the teishu is doing, but you do need to know a few general behavioral guidelines.

• For example, take off your shoes before entering the tea room.
• There will be slippers for you to put on before everything starts.
• Your host will seat you. Sit quietly until you are asked to do something else
• Avoid touching anything with your open palm. Used closed fists as your default hand position during the ceremony.
• You will be expected to eat and drink whatever is served to you. Don’t worry. It’s not much. The sweets are small and delicious, and the matcha tea is also quite tasty, but not so filling that you’ll be full when the ceremony is over.
• You are expected to look around, and there will be a time indicated when you can ask a question. Always speak to the shokyaku, not the host. It is considered very polite to ask about something in the room that you do not understand. For example, “Where is that scroll from?” or “What does that writing mean?” or “What are these tea bowls made of?” Anything about things in the room is fair game, and the teishu will appreciate your interest.
• Don’t be socially fake by complimenting your host. This is a time for sincerity and genuine interest. So, when asking your question, make it from the heart. Ask about something you truly want to know more about. It’s even acceptable to ask about the tea and how it is made, harvested or its history.
• When you are offered the tea bowl, turn it slightly before drinking from it.
• Never, ever even think about smoking during tea ceremony.
• Every object in the room, including the utensils, wall art, flowers and anything your eyes can see is a part of the ceremony. Everything has been selected and carefully prepared by the host. If you are allowed to speak, whether in Japanese or in your native tongue through an interpreter, be absolutely certain that you compliment the teishu on the objects in the room.
• When in doubt, do nothing. Any action required of you will be clearly indicated by the host or by the lead guest. Do not speak unless spoken to. Do not consume anything unless it is offered to you. Japanese tea ceremony is, in some ways, very plain and simple. As a guest, your role is to consume the sweets and tea, and to offer compliments on the room’s objects when given the chance to do so. That’s it! No “heavy lifting” for guests, especially for first-time attendees and non-Japanese guests.
• Wait two days and write a note of thanks to the teishu.

There is no way to know in advance exactly what your first tea ceremony will be like. Just remember to do what is asked of you, or else sit quietly and say nothing. Japanese tea ceremony is many hundreds of years old and is actually something like a cross between a religious and a social ritual. Respect it, and feel thankful that you are allowed to attend, and make the best of the rare opportunity. The experience will be something you cherish for the rest of your life. Many years later, perhaps, you will reflect on the ceremony and begin to understand its deeper meaning.