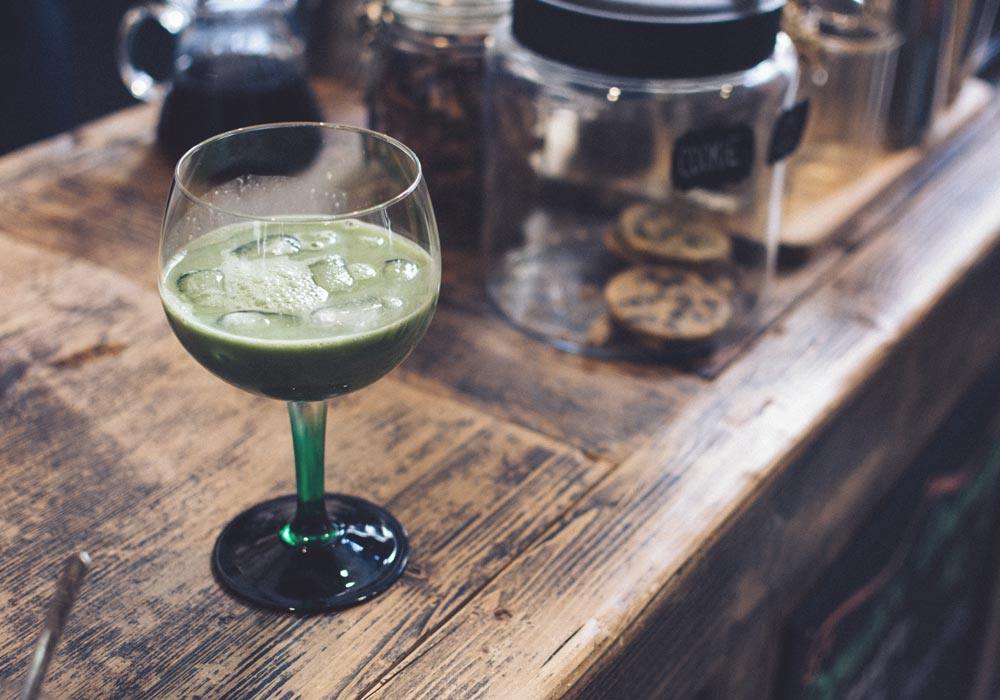 Matcha tea tastes great and it’s good for the body in so many ways. It mixes with pretty much everything, and there’s no end to great summertime coolers and winter warm-up drinks when matcha tea is combined with some of the classic, elite bar drinks from the playgrounds of Scottsdale (Arizona), LA, and Las Vegas. What used to be a novelty in most VIP bars is now a commonplace matcha drink menu that is fast becoming a standard part of the offerings at resort locations everywhere.

Our team scouted some of the biggest and busiest bars and lounges in California, Nevada and Arizona. Their report is below. Note that you can make most of these drinks at home and leave out the alcohol if you prefer. In some cases that will leave nothing but iced or hot matcha tea, but the majority of the drinks still pack a punch even without alcohol.

A real Japanese treat, direct from the Little Tokyo neighborhood of Los Angeles is a drink they call “Sake to me.” It’s easy to make and fun to drink. If you consume more than one, you might not remember the recipe the next day, so proceed with caution.

Mix 4 ounces of warm water with 1 teaspoon of matcha tea powder. Add 2 ounces of any name-brand Japanese sake and a dash of lime juice. Put everything into a cocktail shaker with a handful of crushed ice and shake, shake, shake. Then, drink, drink, drink.

It’s the perfect result of ancient Japan meeting modern California culture. (If you are alcohol averse, use light grape juice or pear juice instead of sake and the taste will be about the same, and the drink will be much more nutritious! That’s what Japanese cooks do when they want to substitute for sake in a non-alcoholic recipe.)

The ATM, with and without alcohol

In Scottsdale, Arizona, a hideaway for Hollywood stars who want to avoid the fishbowl known as Hollywood, bartenders are serving something they call the “ATM.” It consists of about 4 ounces each of apple juice, tomato juice, iced matcha tea, and fresh-squeezed lemon juice. There are hundreds of variations on this drink, but that’s the main recipe.

The bars charge much more for the “party version,” which is the same as above but with a shot of vodka. If you make it at home, try to use fresh lemon, a good apple cider and V8. The no-vodka ATM is a really good sports drink if you water it down a bit.

The big sports bars in Las Vegas help nervous gamblers (and mafia dons, we suspect) relax with what some bartenders call the “mix-and-matcha.” It is simply an even combination of the finest Japanese beer (about 6 ounces) and iced matcha tea. One mixologist told us that it’s best to start with hot-brewed matcha. (Most of the better bars in Arizona, California and Nevada keep a supply of cooled-down brewed matcha tea in their refrigerators to use in drink mixes).

The high-stakes gambling rooms in Las Vegas serve plenty of matcha specialty drinks. One is called the Vegas Hustle, and apparently is quite a hit in the baccarat pits on the Strip. (Baccarat is the card game James Bond played in some of the classic films). This is a drink that has no non-alcohol version, because it is simply a mixture of one part vodka with four parts iced matcha tea. Put fluids and ice in a shaker and shake, don’t stir. Slightly chilled. No ice. Thank you Mr. Bond.

This very sweet drink is showing up on day-cruise ships and in downtown Los Angeles nightclubs. It’s very similar to the Vegas Hustle but with a dose of lemonade. And, it works well even without the vodka. Here’s how to make your own:

This one started out as a coffee drink in Nogales, Mexico, back in pre-WWI days. It’s been called everything from “Mexican coffee,” to “the border bomb,” but the recipe has stayed pretty much the same for the last hundred years. Lately, bars in Nogales, Tijuana and Mexicali (three cities on the U.S.-Mexico border) have been offering it with matcha tea instead of coffee. Here’s how it’s put together:

The drink with no name

Some of the Japanese-owned bars in LA and Phoenix serve a drink that has no name. You merely ask the bartender to mix a Japanese alcohol called “shochu” with iced matcha tea. Apparently, this is only served in authentic Japanese establishments and non-Japanese rarely order it. But, if the bartender is Japanese, just say, “Shochu toe ‘matcha tea’ o ku da sai.” They’ll know what you want.

This powerful drink consists of authentic Japanese shochu, a wine made from rice, barley or sweet potatoes, depending on the brand. Mix about 4 ounces of it with iced matcha tea. You can make the drink at home provided you acquire shochu at a local Japanese food store. Be careful, because shochu has a way of sneaking up on people. There are all sorts of legends about people losing their senses after imbibing shochu. But, if you can find a bar that serves this drink, try it. It’s one of the best combinations of what Japan has to offer, drink-wise, to the rest of the world.

The next time you travel, check out some of the interesting ways that bartenders and restaurant owners are using matcha tea. When not on the road, try your hand at making some of the delicious drinks from the above listing.