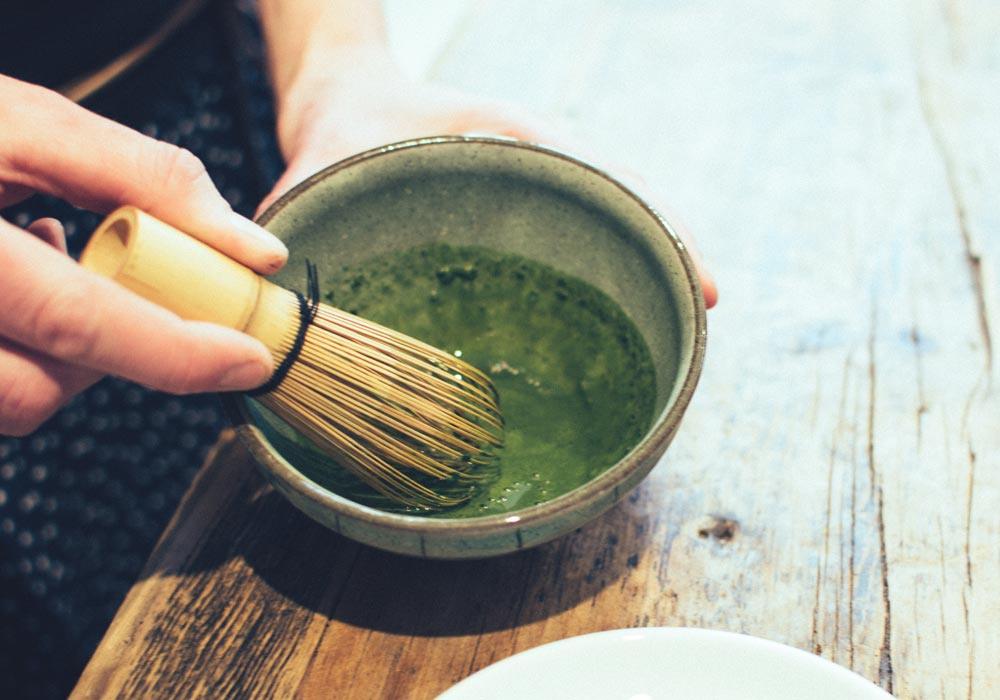 Coffee shops and tea houses all over the U.S. and Europe now offer matcha tea and in dozens of drink variations. Many retailers got into the matcha tea craze more than a decade ago, but the Japanese import du jour has really come into its own in just the last five years. Bakeries, online confectioners, grocery stores, beverage dispensers of every stripe, and of course the global coffee-and-tea chains are now “matcha friendly.”

What are the facts behind matcha tea and its meteoric rise in popularity? Is it the taste, the nutritional power of green tea powder, or something else that has created the food and beverage industry’s latest star? Here are some facts about matcha tea that help to shed light on that question:

What is matcha tea?

Matcha tea is grown primarily in Japan and is a type of green tea that receives shading during its last few weeks before harvest. This practice causes all sorts of chemical processes to take place, almost all of which make for a more nutritious tea leaf. It is then ground into a very fine powder and mixed with water for drinking purposes. Note that the entire leaf is consumed rather than put into a bag and infused with water.

What are the antioxidant levels in matcha tea?

One of the reasons the antioxidant levels are so high in matcha is because it is the only tea that is prepared using the entire tea leaf. In addition, all green teas contain very high levels of antioxidants, with a cup of matcha offering more than 60 times the dose found in a serving of spinach, and 17 times that of wild blueberries.

The chemical at work in the tea powder is called catechin polyphenol. Along with having zero calories and a decent amount of dietary fiber, the antioxidant profile of matcha tea is one of the reasons it has become such a hit with health conscious consumers, bodybuilders and everyday tea enthusiasts.

How is matcha tea prepared?

Based on a centuries-old Zen Buddhist tradition, Japanese matcha tea is mixed with very hot, but not boiling, water. After pouring water over the dry tea powder in the bowl, the mixture is whisked rapidly until a small amount of froth forms on the surface. It is then drunk immediately. Chinese Zen monks brought the tea to Japan in the 11th century. Even today, matcha tea is used as a focal point of Japanese tea ceremony (hence the term “ceremonial grade tea,” as opposed to food-grade).

Millions of consumers order matcha online from Japanese sources. Most of those sellers tend to abide by Japanese government regulations for the processing and selling of the tea. Still other online retailers are based elsewhere and may or may not be offering the real thing.

The matcha tea market, in this respect, is much like the retail niche for fine wines and caviar: the source is everything, and quality varies from excellent to truly awful. Fresh, ceremonial grade matcha tea will be a vibrant green color, whereas older or lower quality varieties will be dull green or even brown.

Matcha contains about one-third the amount of caffeine in a comparable amount of coffee, but also contains catechins that cause the caffeine to be released more slowly into the bloodstream. That’s why there is no “coffee rush” after drinking even several cups of matcha tea.

Another factor that plays against the typical effects of caffeine is matcha’s L-theanine content. The amino acid has been shown to induce calmness and mental alertness, characteristics of meditative states. Historians conjecture that Zen monks used the tea in varying quantities to prevent sleepiness during long sessions of contemplation. Matcha enthusiasts say the caffeine effect of matcha is less pronounced but longer-lasting than what coffee delivers.

Matcha is different than most other teas because it has a grassy, earthy taste. Some compare it to the darker herbal teas, but that description still misses the mark. First-time matcha drinkers say the tea is slightly bitter and needs sweetening, though that demand lessens as one acquires a taste for unadulterated matcha. The Japanese typically take a small, very sweet roll or candy immediately before drinking the tea. This has the same effect that Turkish coffee drinkers get when they sip their potent beverage through a sugar cube held between the teeth.

If you plan to prepare some matcha tea for yourself, it’s best to order from one of the Japanese online retailers. Ask for “ceremonial grade” rather than food-grade tea. The former is specifically made for drinking while the food-grade matcha is used in cooking and baking. Prices change, and there are many products of varying quality on the market, but as of late 2015, acceptable ceremonial grade matcha tea is priced between 35 and 60 cents per gram (the same as investment-grade silver bullion coins)!