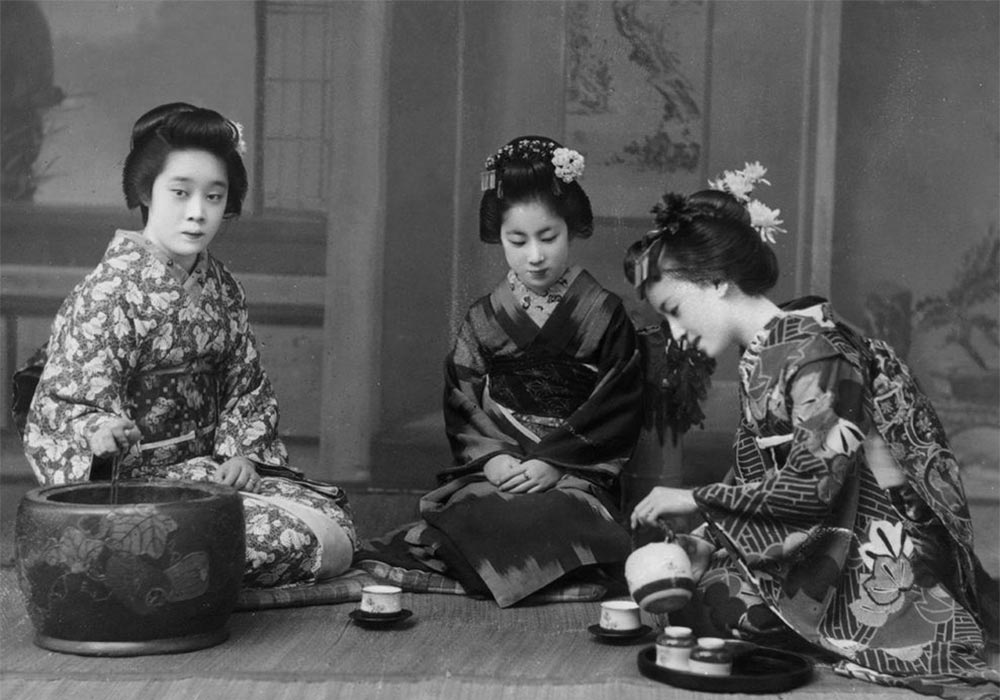 Many non-Japanese know a thing or two about traditional tea ceremony, its history, intricacies and religious origins. However, few people outside Japan have a deep understanding about the esoteric meaning of the practice. Indeed, even in Japan the secret meaning of tea ceremony is little understood except by those who have devoted their lives to the discipline, and by those who are experts in the preparaton of matcha tea in traditional rituals. And, a discipline is what it is, in every respect and by every definition of the word.

In order to acquire at least a working knowledge of the inner teaching regarding tea ceremony, one must travel back in time at least two thousand years. China is the true birthplace of tea ceremony, but the Japanese are the ones who developed the practice and kept the flame alive into the modern era.

Zen Buddhism can probably be called the founder of tea ceremony as it is practiced today in Japan. The first two people who brought tea and its serving rituals from China were Buddhist monks. Each of them did much to establish different parts of the ceremony that we know today. However, much of what takes place in Zen Buddhism is not what it appears to the outside observer.

Because Buddhism itself is an inner practice for the most part, an outward ceremony or ritual often reveals nothing about the inner meaning of a given behavior. Tea ceremony and meditation are but two examples. How could one know what is taking place during meditation just by observing the person in the meditative state? The same goes for tea ceremony. Tourists and outsiders can watch, even take part in, a Japanese tea ritual without learning anything of its inner, esoteric message.

Books on the subject often mention that the central aspect of tea ceremony involves harmony, respect, purity and tranquility. But what does that mean, aside from the bare definitions of those words? Like everything else Zen, this particular social ritual contains an inner and an outer form. Perhaps the structure of “inner-and-outer” is the dominant Zen influence on Japanese tea ceremony.

The inner aspect of tea ceremony emphasizes simplicity and naturalness. These two qualities are what give the outer form of the ceremony its unadorned, quiet, simple appearance. The outer portion of tea ceremony emphasizes the Japanese concept of “sabi,” or the material life. One notices this characteristic when viewing the weathered, aged materials that surround the tea room. They are a reminder that our exterior, physical life is but a temporary thing that will decay and eventually depart.

By understanding the inevitability of impermanence (sabi) and the simplicity of our inner being (wabi), one can grow toward a state of consciousness even in this life. True aficionados of tea ceremony tend to view it as an esoteric religious exercise, and nothing less!

There is, believe it or not, much science behind the practice of ritualized tea service and consumption. Modern experts on the topic point out that both sides of the brain are stimulated by Japanese tea ceremony. This balanced activity helps to bring a deep calm and even a spiritual consciousness to those who take part in the activity.

Consider that tea ceremony works directly on all five senses. This is by design. Buddhist monks in ancient times apparently structured the ritual so that it would wake people up, both physically and spiritually. At the same time (and this is part of the dichotomy of the affair, or better said, the complementarity of its double nature) tea ceremony works to bring a deep inner peace and tranquility to those involved by bringing mind and body together.

Smell, touch, taste, hearing and sight are, respectively, met with the aroma of the tea and the straw in the floor matting, the feel of the pottery’s glaze, the tea itself, the sound of the water as it boils in the teapot, and the visual images of the wall scrolls and flowers in the room.

Both sides of the brain

With all five senses awakened and in tune, the left brain hemisphere has plenty of material for thought, including the ritual itself, the implements, the process and “facts” of the ceremony. These are standard types of topics that the left hemisphere of the brain enjoys analyzing. On the other hand, or other side of the brain rather, the right hemisphere is attending to the beauty of the flowers and scrolls, the atmosphere of the entire room, the feelings between the guests and host.

This experience, with both sides of the brain involved equally in the process, is exactly where many people see the face of Zen in modern tea ceremony. For Zen Buddhism often works along the same lines of thought, with both the left and right brain areas stimulated equally, in order to deliver a chance for insight to the practitioner.

The hidden meaning of tea ceremony

Those who only know tea ceremony through books or a brief visit to Japan usually miss out on some of the unseen angles that pertain to tea and its rituals. For one thing, even among the Japanese themselves, tea ceremony is considered a hard-to-understand, esoteric practice that takes years to appreciate. An analogy might be the way Westerners view classical violin playing. It takes a bit of study and a good deal of time to listen to a violin piece with true appreciation for the music, the instrument and the player.

Japanese who wish to learn more about their country’s most secretive art form join informal clubs to study it. After that, a few go on to attend formal, sometimes rather expensive, lessons from a tea master. There are, as in many martial arts, certificates and ranks associated with many of the prominent tea schools throughout Japan. For the select few who decide to delve deeply into the art, perhaps a lifetime of study awaits. Much as a concert pianist or cello player might give his or her life to the perfection of musical technique, some Japanese will devote themselves fully to the ancient art and ritual of tea ceremony.