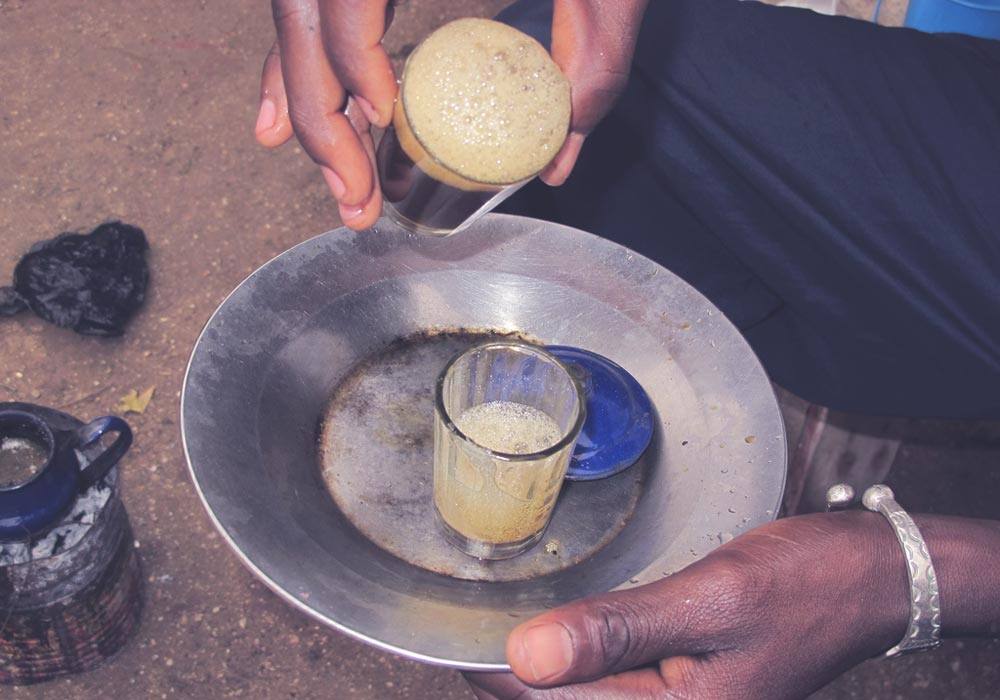 The term “tea ceremony” usually conjures up mental images of formal rituals in old Japan, or more modern ones in India or Malaysia where business deals are struck over a pot of tea and a handshake. In West Africa, ancient tea ceremony goes by the name “attaya,” and is anything but formal. In fact, tea culture in the continent’s western nations of Gambia, Mauritania and Senegal are the polar opposite of Japan’s ceremonies, where matcha tea is the focal point of a semi-religious event.

The attaya is more accurately described as a tea ritual or social function akin to a very informal wine-tasting session or round of toasts in Western cultures. Something like 80 percent of all West African children and adults drink tea on a daily basis, most of it being some variety of mint tea made in a way that likely originated among the ancient Moors.

French, Arabic, a little English, and local dialects are interwoven in everyday West African speech; and that makes for colorful, loud and friendly conversations during the traditional three rounds of tea in a typical attaya ceremony.

Despite its wide practice throughout West Africa, centering on Senegal, the attaya ceremony is largely unknown in the West. Here are some key facts that explain how the tea is made and served, how people interact while drinking it, and how to make a pot of West African tea that is “attaya-ready.”

The preparation of typical Senegalese mint tea, the kind used in the attaya ritual, takes quite a while, and is not as easy as preparing other kinds of tea. This is partly by design, enabling everyone to have a long conversation while the tea is being heated and mixed. Mint tea is a natural preventive for cavities and several other dental problems.

Every African attaya ceremony consists of three rounds. Tea is served in small glasses (not cups) with each round being quite different in taste. Legend has it that the first, bitter round represents the beginning of life and the difficulties of growing up. The second round is sweeter but retains the strong mint flavor. The third and final round is mostly very weak tea with plenty of sugar. The second round is said to signify the sweetness of mid-life, love, and marriage, with the final round being symbolic of old age. There are hundreds of historic stories about what each round means, but they all point to some version of “stages of life.”

Almost all the words related to African tea ceremony, including the word “attaya” itself, are Arabic in origin because the early Moors are thought to have perfected the art of preparing sweet mint tea. The Senegalese language is largely derived from Arabic. The best-known English word that comes directly from Senegalese is also food-and-drink related; “yummy.”

Tea is always served to visitors in West African homes, but more commonly it is drunk during social gatherings at restaurants, on street corners, in alleyways, wherever people meet to talk and socialize.

There are dozens of ways to prepare African mint tea for attaya, but the most common one calls for a large pot of boiling water (preferably over a charcoal fire) to which is added green tea leaves, mint leaves and a generous dose of sugar. After a long boiling period, the tea is mixed by pouring it to and from the glasses several times. This distributes the sugar and mint evenly.

Good African mint tea has lots of foam on top. This is a result of the pouring process (see above) but it is usually less thick during the second and third rounds as the concoction weakens.

It is said that in many West African nations potential burglars and thieves will steer clear of homes and businesses if they smell mint tea being brewed in the evening. That’s because night watchmen and late-shift police typically drink strong mint tea to stay awake. The first round alone is enough to keep a person’s eyes wide open for several hours.

The taste of the tea depends on the preparer. Talented tea-makers in Senegal and neighboring countries usually do a careful head count before preparation. That way, they can calibrate the amount of sugar, tea leaves and mint to use, as well as how much water to prepare. Considering that each person will be drinking about 20 ounces of tea over a 2-hour period, very large pots are used when there are more than a few guests.

Because the caffeine content is so high, African-style mint tea is never served on an empty stomach, but always after meals. And contrary to almost every other nation’s tea-drinking practices, West African attaya attendees slurp and gulp their tea rather quickly. The socializing takes place between rounds of drinking rather than during. All of which means that a typical attaya 3-round ritual will include no less than 2 or three sessions of chatting that are each about 30 minutes long.

“Free speech” is the only rule

During an attaya session, guests are expected to express their opinion about the tea, saying whether they think it too strong, too weak or just right. Unlike in Western cultures, it is not considered rude to speak one’s mind about the quality of the tea at an attaya. “Wow, that’s way too strong for me,” and “Is this water or tea?” (during the third round) are routine comments from attaya participants, all of which bring either laughter or a reasoned response from the preparer, like “Well, you Brits and Americans are too weak to drink ‘real’ African tea. Hahahaha.”

Many Westerners are taken aback when they realize that West African attaya sessions are truly free-wheeling affairs, where just about any subject is fair game for discussion, and friendly argumentation is even encouraged and appreciated. (Contrast this with Japanese tea ceremony!)

It’s interesting to note the differences between the world’s most ritualized, formal matcha tea ceremonies of Japan and the much looser, socializing tone of West Africa’s attaya. In the former, virtually every word and action is prescribed by tradition. In a typical attaya, a street vendor might prepare the three rounds of mint tea with varying amounts of sugar and much chatter between host and guests.

Regardless of these obvious differences, West African attaya is one of the most colorful and interesting “tea ceremonies” on earth; and everyone should experience the camaraderie and good cheer that accompanies each glass of African mint served during attaya.